State Budget: Back to the barn

Put away the Prozac. There are now surpluses as far as the eye can see.


That is the message from this year’s State budget.

If it sounds too good to be true it probably is.


When a government announces in a Budget that it will spend extra on health next year, is that compared to


In the case of health the answer is 2.


If the system is in crisis spending less is unlikely to fix the problem.


That’s what Building Tasmania’s Future means. The Mercury was quite correct in depicting the Treasurer in this morning’s edition as a snake oil salesman with a warning that the tonic being marketed may contain pork.


There’s an unreality about the budget. Let’s have a look at the overall Income Statement (Budget Paper 1 page 47), in particular the figures for employee expenses. To make it easy part of the relevant table is pasted below. 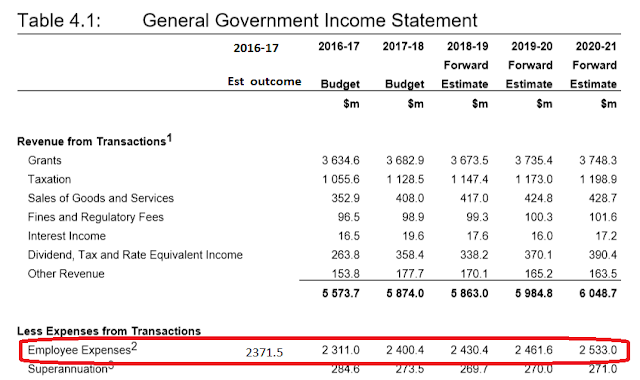 I’ve added the estimated outcome figures from page 191. It easy to see the increases in employee expenses are $29 million in 2017/18 then $30 million and $31 million in the next two years.


In % terms that’s a 1% increase in each of the next 3 years. Scarcely believable when the estimated outcome for the current year 2016/17 was $60 million above budget and the Treasurer had the place ticking over like a well oiled machine. Even less credible given wage increase are tracking at a rate higher than 1%, and employment in the health area is supposed to rise.


The coming election is sure to be a pork fest.

“Australian banks are upset. Their $30 billion per year gravy train of profits from the Australian people is finally being slowed down.


A levy on bank liabilities of 0.06% annually was announced as part of the 2017 Federal government budget, and is expected to raise about $1.5 billion per year, or 5% of bank profits.


To be clear, the banking system is a regulated cartel. Its primary function is to provide a public good in the form of the money supply of the country. As such, we would expect it to be uncompetitive, and use tight regulatory controls to ensure that the privileged position of private banks is not being abused.

In my book, Game of Mates, I explain that the result of this uncompetitiveness and lack of adequate regulation in Australia is that over half of the banks' profits can be considered economic rents, which could be taken back with better regulation and shared with the public at large.”

Read the full article on Cameron Murray’s blog.
Posted by tasfintalk at 20:51 1 comment:


So begins a just released book by one of my favourite economists Cameron Murray, written with another Queenslander Paul Frijters.

Read more »
Posted by tasfintalk at 13:01 No comments:

Email ThisBlogThis!Share to TwitterShare to FacebookShare to Pinterest
Labels: Money and debt, Other issues

A note on GST relativities

If you want to understand more about how the GST pool is split between States have a look at the following table.

It’s good that the Federal Treasurer has raised the possibility of legitimising more government debt.


The Federal government budget papers are to be revamped, we are told, to more realistically reflect good and bad debt.


What does all this mean?

Read more »
Posted by tasfintalk at 16:34 No comments: