The previous post about Basslink was written with a short tabloid op ed in mind, hence some of the detail was missing.


Finding and fixing the Basslink fault will be the easy bit.


Life after Basslink will probably be a little different when one looks at Basslink in the context of Hydro’s current financial position.


The following contains most of the numbers and detail omitted from the previous blog.


The BL liability comprises the variable rate facility fee and the facility fee swap deal. The latter removed the risk of rising interest rates that affect the former. Macquarie Bank is believed to be the counter party in the deal. The amount paid under the swap deal was the difference between the prevailing variable rate and the agreed fixed rate of 7.41%. In 2012/13 the fixed rate increased to 7.83% after negotiations with Hydro regarding the counter party’s “right to break”. Whatever that means? That’s all we were told in the Annual Report at the time.
At any point the value of expected outlays over the term of both deals is recorded as a liability by Hydro.


The following shows the BL liability split into the two components. 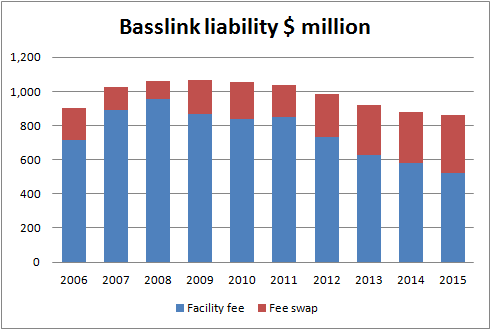 Over time the total value of the liability will decrease as the unexpired portion of the term reduces. But if interest rates keep falling the rise in the swap liability will negate some of the benefits of the gradual reduction in the facility fee liability.


One further point worth noting is that whilst BL commenced in 2006, the swap deal was signed in 2002. Hence in 2006 there was already a swap fee liability as interest rates had fallen since signing the deal.


The BL liability is depicted alongside the value of the BL asset in the following chart. 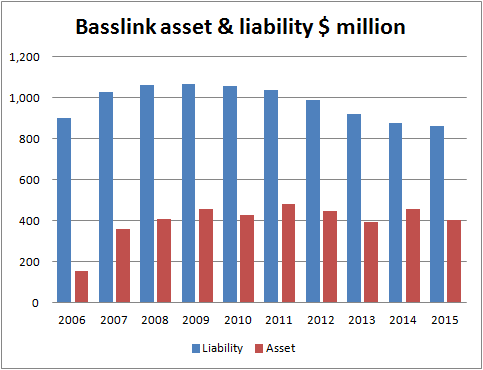 The liability has already been discussed. The asset is the value of inter-regional revenue that flows from BL to which Hydro is entitled.  Every year an assessment is made based on the latest info and predictions as to what Hydro may earn from  future inter-regional revenue and the amounts are then converted into a present value lump sum using a discount factor (or interest rate) commensurate with the risks involved. Risky estimates mean a higher rate and hence a lower value, and vice versa. 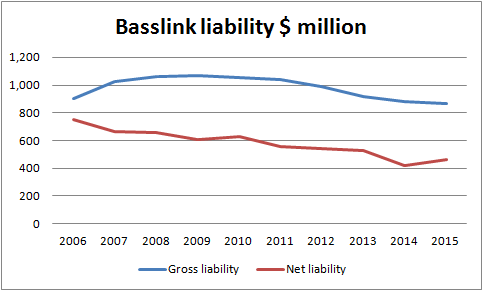 The net liability increased slightly in 2015 after gradual falls since 2006.


The crucial question is how the asset value will fall after the latest outage which will surely force a re-rating of risks to future income. All happening at a time when new technologies are impacting and demand patterns changing.


One thing for sure is the liability is unlikely to budge much.


The BL liability is listed in Hydro’s accounts as a financial liability. That’s accountants’ talk. For all intents and purpose it’s debt just like Hydro’s other major debt, borrowings from Tascorp. Just as the BL  interconnector is an integral part of Hydro's generation assets, the BL liabilities are an integral part of Hydro's debt on its generation assets.


The following chart shows the detail: 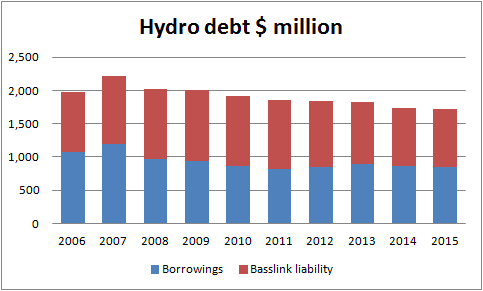 The latest combined debt is $1.7 billion.


Everyone will have a view as to whether that’s a lot of money. The crucial factor is what are Hydro’s cash flows ? After all that’s what services the debt.


Operating cash flow is easy to identify. It’s the net amount after paying all the operating expenses, and before payments for capex and dividends to government and loan repayments, if any.


The following contains the details: 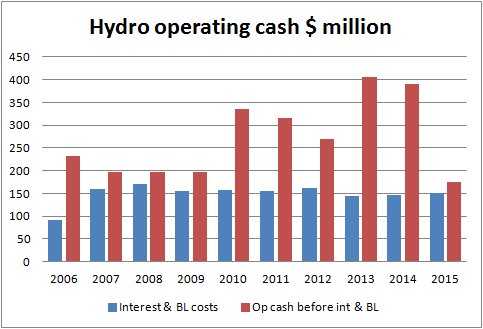 In the good years, 2013 and 2014, when carbon trading brought home the bacon there was plenty of operating cash to service Hydro’s debt.


But 2015 paints a different picture, operating cash of $176 million compared to $151 million of debt service costs.


Just a couple of caveats.


The 2015 operating cash figure contains income tax equivalent payment to the government of $80 million which relates to tax payable  on the very profitable 2014 year so the 2015 year isn’t quite as bad as it looks, just so long as it doesn’t get much worse? Still bad tho’, not much interest cover which is the thing that troubles lenders, and may at some point cause breaches of lending covenants which may require remedial action by government. More importantly there's not much left to pay for capex which should run at $100 million pa for a company like Hydro .


Hydro, from 2006 to 2009 specifically itemised BL costs, but since then the detail has been lost (or hidden?).

Keppel Infrastructure Trust, BL’s owner earned $76 million in its 2015 financials from the BL fee. When the swap fee paid to Macquarie, believed to be about $35 million in that year is added, the total is $111 million.   Hydro also records the current liability portion of the facility fee and the fee swap liability in its financial statements indicating the amount of the liability expected to be discharged in the ensuing year. The actual amounts eventually paid may differ but the expected amounts have been well in excess of $100 million in each of the last 4 years.


It’s not immediately obvious that Hydro has mismanaged its water as claimed by many. 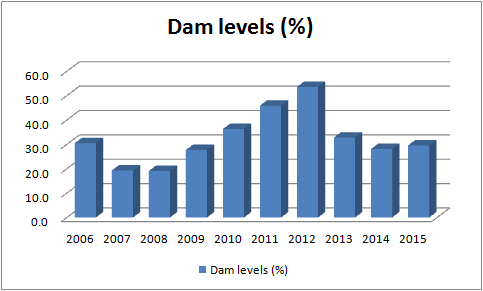 The early years showed falling dam levels but even these came at a time of net imports.


But 2015 was a year of net imports. Seven out ten years have seen net imports. The only net export years were 2011 (a small amount only) and the carbon tax years. 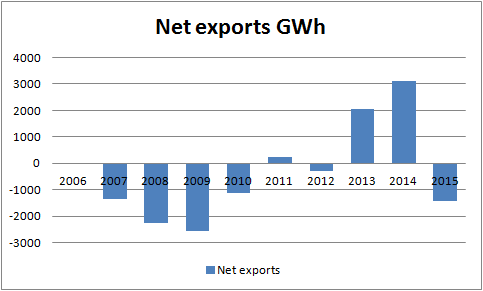 Just remember, a year of net imports means there were still exports to take advantage of price differences, or arbitrage opportunities if you want to sound like an investment banker.


Apart from the two good years, Hydro’s returns from BassLink have been less than the business case adopted by the Hydro board in 2002, and in most cases insufficient to cover the annual costs. The losses have been magnified by the fee swap agreement which fixed interest rates at the 2002 level.


We shouldn’t dwell too much on who is responsible. The main purpose in reviewing the past should be to work out what has happened to ensure mistakes aren’t repeated.


At the core is trying to understand the numbers, for they will inevitably determine what future path is taken.


BL liabilities are just part of the debt burden which Hydro has to service.


The governments’ equity injection of $205 million, from Tas Networks in 2015 was labelled a capital reconstruction but debt wasn’t reduced. Instead it was used to pay dividends to the government and to fund capex for the year.


The Basslink outage has added to what was already a plateful of problems.
Posted by tasfintalk at 09:12