Economics has been squeezed out of most business studies courses and as a consequence recent graduates have little understanding of macroeconomic events. The following is the first draft of a paper which attempts to explain credit formation, derivative products and the ensuing GFC, from an accounting perspective, presented to  business studies students. Whilst a simple model beloved by economists is used, the major point of is to interpret what happened from an accounting perspective.


There was a desert island. The inhabitants lived off coconuts produced from palm trees. Any surpluses were sold to passing ships. The proceeds were put under mattresses. There were no banks. Some of the surpluses were used to buys luxuries from passing ships. Also some tools to help tending and harvesting the coconut crops. The palm trees also provided materials to build houses. The palm trees were sterile and the islanders were unable to propagate extra trees. New trees needed to be imported at a cost of $1,000. But no one had that much under their mattress. So the island grew slowly. Everyone tended their own trees. The Government collected income tax of 25%. It was spent on public goods for the benefit of the islanders. Everyone was happy. The system was stable. Farmers ended with 75% of national income.


Table 1 details how it worked.

Each tree was worth $1,000 and produced a 6% return after tax. That part of the surplus not spent on luxuries or used to purchase equipment to help with the cropping, was put under the mattress.


Then along came an expat who’d worked in faraway lands in a bank. The Government allowed him to set up the island’s first bank. For every $1,000 lent to customers, the bank needed to have $100 of its own money. This was the bank’s capital base. The balance could be raised from depositors who were promised interest on their deposits (3% pa). The bank lent it out to farmers wishing to buy more palm trees at $1,000 each. They were charged interest of 4 % pa.


Table 2 shows how credit creation made the island better off.

The mattress money was deposited by households with the bank and earned some interest (2.25% after tax).Table 2 shows the ‘household’ sector separately from the ‘farm’ sector, but in reality all households are farmers and vice versa.  Bank loans enabled the purchase of more trees. GDP increased. A farmer made $90 instead of $60. Farms/households received 69% of a much larger pie. The farm’s rate of return rose from 6% to 9%. The bank made a rate of return of 9.75%.


Investment bankers watched what was happening and spied an opportunity. But having to tend trees wasn’t exactly what they had in mind. Each farm was worth a net $1,000. Why not arrange for a Private Equity Fund (PEF) to purchase 50 % of a farm for say $600 allowing the farmer $100 profit on the deal? As part of the arrangement the farmer will continue to look after the trees but will pay 50% of the net proceeds (after interest but before tax) to PEF. The PEF raised $100 from private investors and approached the bank for a loan of $500, being the balance of the purchase price. The bank agreed. It had already arranged for much of the purchase price to be re-deposited with the bank ($450) or added to its capital base ($50).

PEF made a 30% return on its $100 investment. Overall indebtedness increased. But GDP/National income remained the same. Farms/households share of national income fell to 47%, but they had less assets tied up in their farms. PEF and, to a lesser extent the bank, grabbed a share of income from the farmers. But the bank was envious of PEF’s rate of return. The bank’s return was still only 9.75% .Its share of the pie was only 9%.


Farmers were now holding out for higher prices once the first deal became public knowledge. So another lot of investment bankers who ran a Hedge Fund decided instead of buying part of a farm, they would buy half of the bank’s loan book for $750. The bank agreed, even offering to lend 90% of the purchase price. But the Hedgies had already arranged a Yen loan at 0.25% interest pa. They’d locked into the rate for 3 years using interest rate options. The bank didn’t mind, it knew it could lend the $750 at a higher rate of interest to islanders to build extra houses that were not really needed. So the bank bundled half of their loan book (to farmers and PEF) into a collaterised debt obligation (CDO) and sold it to the Hedgies.


Table 4 sets out the figures. 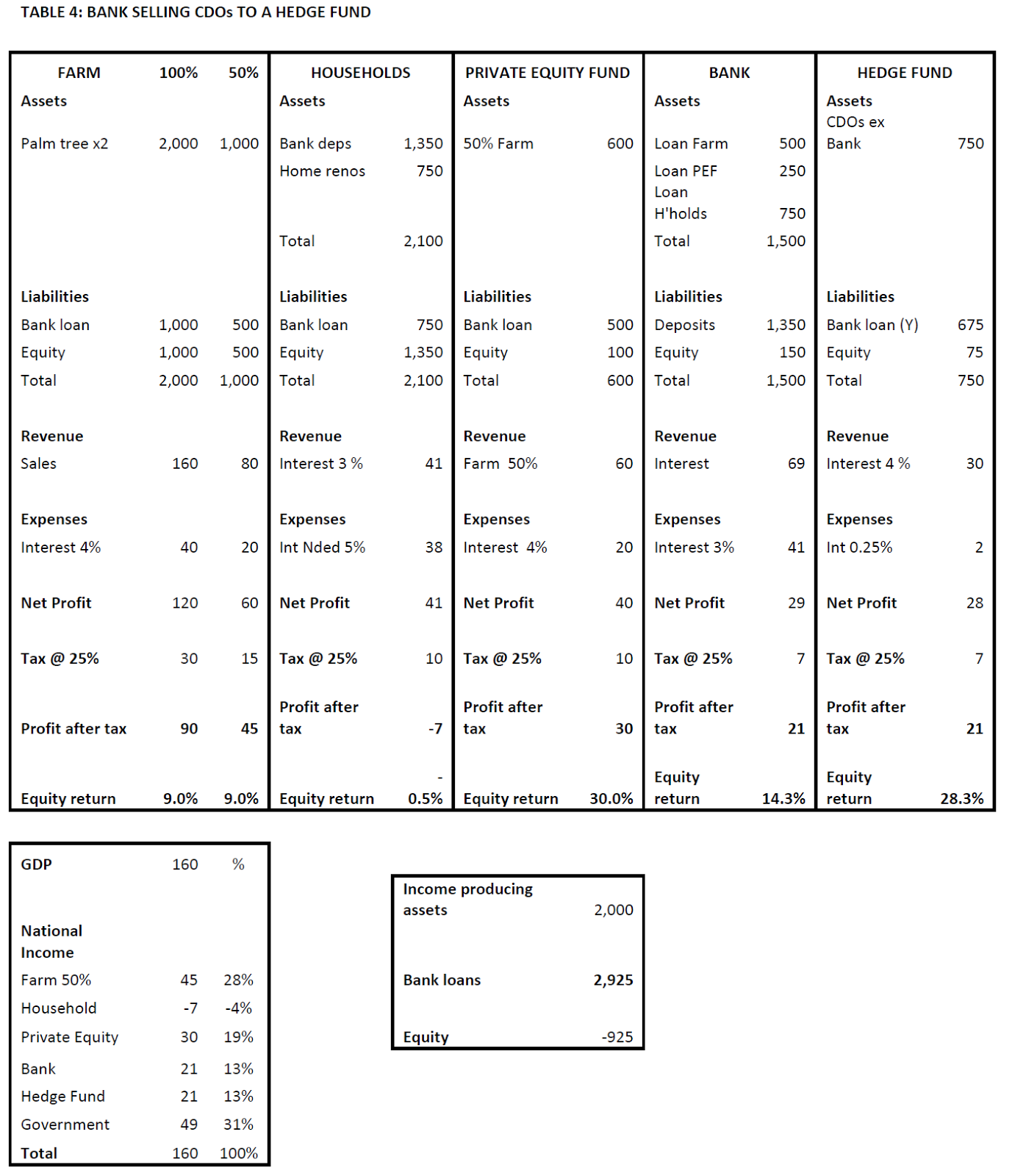 
Then catastrophe struck. A SARS like virus effected both tourist numbers and coconut production. Income fell 50% overnight. The value of the trees halved. PEF’s equity in its joint venture arrangement disappeared. It became insolvent.


Table 5 sets out the details.

Households reduced their bank deposits by $100. This was used by farmers to buy back the 50% of the farm owned by PEF. There were no other bidders.  PEF owed $500, half directly to the bank and the other half to the Hedge Fund via CDOs. The bank had to find additional capital of $100 to pay the householders. Fortunately $50 was redeposited being its 50% share of PEF’s winding up proceeds. The other $50 from PEF’s winding up was paid to the Hedge Fund. The Hedge Fund is now insolvent after receiving only $50 for CDOs which cost $250. The loan write off in the bank’s books has also caused its capital to fall to $50, well below the 10% required. Overall loans are $2,375 compared to $1,000 worth of income producing assets. Buying back the farm enabled the farm/household share of national income to increase to 26%. The banks share was 27%.


The Hedge Fund defaulted in Table 7 and was wound up.

The bank paid $100 to the liquidator for CDOs with a face value of $500. To do so it had to raise an extra $50 to add to the $50 cash it already had on the balance sheet. But it’s still in trouble with its capital adequacy (only $100).Its share of GDP/ national income is now at an all time high of $40 or 50%.It doesn’t pay any tax because of carry forward losses from the PEF loan write off. Farms and households are starting to struggle with their small share of the pie, only 26% of the total. Overall loans are reducing, fortunately.


The Government intervened to cut interest rates shown in Table 8.

Interest rates fell to 1% for deposits and 2% for loans. The banks share of the national income pie fell from 50% to 29%. It restored the position of the farmers, the income producers. The farm/ household sector increased its share of the pie to 49%. But the bank still had an inadequate capital base.


This uncertainty led to a run on the bank. Depositors demanded $1,000 be repaid. There was no cash in the bank’s vaults. The Government had to lend them $1,000.


Table 9 has the details.

The bank’s capital base is still a problem. House price plummeted with all the uncertainty but with houses changing hands, the banks managed to reduce indebtedness by households to $375. Amongst all the turmoil the banks maintained their relatively high share of national income at 31%.


Where to from here?


·       Continue as is? The banks are taking advantage of Government support, are technically insolvent, in breach of capital adequacy ratios, and yet are still helping themselves to 31% of the national pie.


·       The Government to demand an adequate rate of return on the funds used to prop up the bank?


·       The Government to nationalise the bank and write off loans to farmers? And start all over again with a new financial system?


All four options or variations thereof are being considered by policy makers around the globe. Whatever option is chosen there still needs to be funds that will permit credit expansion for the economy to grow again and which brought such a windfall in the first place (and which eventually brought the island to its knees when the concept was hijacked and abused by bankers).

(The above is a based on Chapter 10 in a book titled New Monetarism(2008) by David Roche and Bob McKee)
Posted by tasfintalk at 10:04

Email ThisBlogThis!Share to TwitterShare to FacebookShare to Pinterest
Labels: Other issues