But the latest response to Elise Archer, Liberal Member for Denison at http://www.forestrytas.com.au/uploads/File/pdf/rti2011/RTI11-21_elise_archer.pdf is of particular interest.


A briefing note (below) from Bob Gordon dated 29th July 2011 following an FT board meeting two days earlier claimed Gunns financial problems were overwhelming and likely to result in the appointment of a Receiver by the banks being the secured creditors. 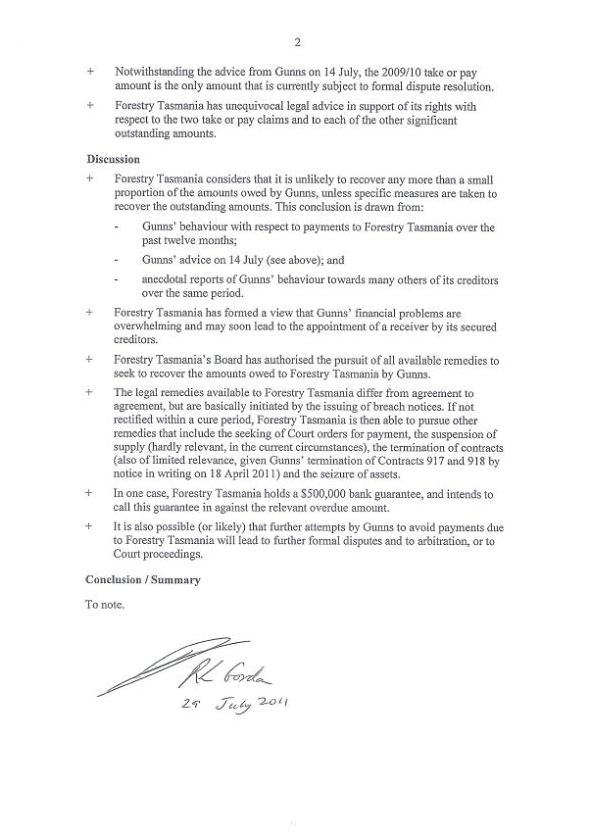 Talk about the kettle being called black by a particularly sooty pot. FT at this stage had just experienced another year of negative operating cash flows. The only thing stopping it from following Gunns into Receivership was the Letter of Comfort.


Given any payment from GNS was unlikely, it was incumbent on the Government to find some money to help FT survive so they arranged to pinch $11.5 million from IGA funds.


But how do get money into FT from the IGA? Even though Gunns terminated Contracts 917 and 918 in writing on 18th April as further disclosed in the briefing note the only way was to resurrect the residual rights to provide for payment to Gunns, and divert some to FT ostensibly in settlement of receivables due. Without a transfusion FT was virtually out for the count.


It is likely that Gunns did not include amounts allegedly owing to FT as payables in its financials. To do so would have meant the absurdly concocted measure of underlying profit reported to the market was wrong.


Wouldn’t want ASIC knocking on the door again, would we?

It is the sequence of events that is most interesting.


When did the question of a value on the residual rights arise?


Gunns threw in the towel on native forests and abandoned contracts 917 and 918, FT then informed the Government that Gunns was insolvent and unlikely to pay the $26 m to FT which in turn would make FT insolvent? So the Government needed to find a solution for its wholly owned subsidiary?


So when did the question of residual rights surface?


After the possibility of Gunns’ insolvency?
It is clear the Government asked the Solicitor-General  (SG) to advise on the matter of residual rights. Not the value but whether it was possible they still existed.


To add a bit of gloss to proceedings the Government employed a Probity Auditor, not to vet whether rights existed or whether they had any value, but simply whether due process was followed. Which simply meant to check whether the final outcome was consistent with all the relevant documents and correspondence. And surprise surprise, it was.
Why was the particular Probity Auditor selected?


Why not our Auditor General?


Well one of Tasmania’s leading ethicists, the leader of the Government in the Leg Co explained in answer to a question recently that “the Auditor-General is authorised to act independently; he has complete discretion in the performance of his functions and is not subject to direction into whether or not a particular audit is conducted or report made”. Furthermore it “could potentially compromise his ability to perform a holistic, external and independent review of the processes relating to the Tasmanian Forests Intergovernmental Agreement in its entirety”. Better not give the job to someone with too much discretion. Much better to get someone else to do the job, like some guy who just happened to be a Government GBE appointee on the Board of MAIB. The Government’s overriding concern for independence caused it to select as Probity Auditor a person who had recently been bestowed a Government favour.


I’m not sure I understand‘independence’ any longer. Like ‘labour values’ it is becoming meaningless.

Then there is the question as to how the value of the rights was determined. We are still in the dark.


The Government unbundled the process.


Get the SG to give an opinion on whether rights exist.


Then get another guy to pass judgment on whether due process was followed.


Get someone else to decide on what the rights are worth.


Keep everyone in the dark, at arm’s length from one another and then hey presto, abracadabra, Gunns gets $23.5 million and FT $11.5 million.