On matters of financial management of the State’s finances almost all attention focuses on the Budget circus now programmed for May each year.


The political and media cycle ignores the Treasurer’s Annual Financial Report (TAFR) tabled in October each year. Whereas the Budget contains Estimated Outcomes for the almost completed year, the TAFR contains the actuals for both the General Government (GG) and the Total State Sector (TSS) which includes the GG plus all wholly owned subsidiaries – the Government Business Enterprises (GBEs) and State Owned Corporations (SOCs).


The TAFR is the equivalent of a listed company’s Annual Report which at least is scrutinised by shareholders at an AGM. No such attention is given to the TAFR which is a pity because it a comprehensive outline of the State’s situation based on actuals, free of the hype and nonsense that accompanies Budget papers.


Whilst spasmodic attention is given to GBEs and SOCs, there is a noticeable lack of understanding of the financial role these entities play as part of the TSS and their life saving contribution to their parent company, the GG.


The aim of this and the next few posts is to have a closer look at the Balance Sheets for both GG and TSS....... the statement of assets and liabilities for both......  and try to explain the important bits........ cash, loans, net debt and net financial liabilities and the fiscal strategy measures that relate to the balance sheet.

After all accounting is just a series of plusses and minuses.


To pick up from the detailed cash flow analysis of the State (HERE)the starting point is the GG’s cash balance. 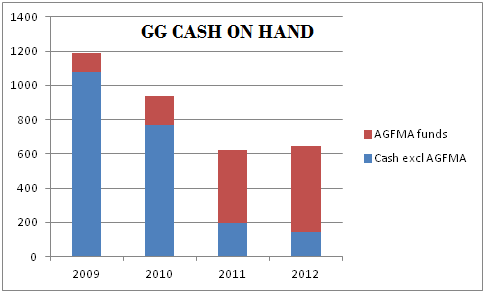 
The red bits are Australian Government grants paid in advance (RHH and Railyard funding for example). Without them our cash to spend as we choose, the blue bits, is only enough for 3 weeks wages.


The State Government has long been in the habit of appropriating more than the available cash to meet its spending commitments.


From an accounting viewpoint the difference between unspent appropriations and unspent cash, the amount ‘internally borrowed’, or IOUs, were recorded in an account titled the Temporary Debt Repayment Account (TDRA).


Most of the amounts borrowed were from the Superannuation Provision Account (SPA), the amounts appropriated as part of the plan to extinguish the unfunded superannuation liability by 2035.


In most years there was insufficient in the SPA account so amount were borrowed from other accounts.


The following chart shows the details.


In only 2 years 2008 and 2009, was there any cash backing for the SPA. This was as a result of the cash injection of $300 million following the sale of Hobart Airport in January 2008. In every other year every last $ of SPA amounts were internally borrowed and spent.

It must be emphasised that there was never any cash set aside to eventually extinguish the unfunded superannuation liability. it was only ever a notional figure. The Opposition are inclined to say  the Government has spent the amounts set aside for a rainy day but the truth of the matter is it was never actually there in the first place.

The SPA never had any cash backing thanks to all the internal borrowings. It was little more than a charade


With the advent of the GFC and David Bartlett obtaining the keys to the vault things worsened and soon large amounts were borrowed from other deposit accounts.


In the last budget it was decided to tear up the SPA IOUs as the amounts were never going to be repaid. This had the effect of reducing the TDRA by the amount of the SPA balance, which still left $650 million in IOUs at 30th June 2012.


The pattern of IOUs for other deposit accounts is depicted in the following chart.


In earlier years the IOUs were only 10% to 20% of account balances, and it was thus a sensible use of funds to internally borrow rather than borrow via Tascorp.


But by 2012 the IOUs represented 50% of account balances (quite apart from the SPA account which was all borrowed), and matters were getting out of hand.


Rather than continuing with the TDRA the Government decided at 30th June 2012 to organise an overnight loan of $650 million (from Tascorp the State Government finance arm) to repay the amount internally borrowed from other deposit accounts.


The next day the loan was discharged, again using amounts internally borrowed.

On each future balance date the Government will organise an overnight loan to repay any internal borrowings.


The overnight loan/deposit repayment has the effect of boosting loans and cash on hand by similar amounts. It’s just a housekeeping exercise. There is no change in net debt.


The Balance Sheet (or statement of Financial Position as it is sometimes called) reflects the situation.

Without the overnight loan of $650 million, borrowings would have been $246 million and cash and deposits $602 million.

Most of the borrowings relate to a long term debt in respect of housing funds borrowed from the Australian Government.


Net debt is narrowly defined to include cash, deposits and investments less borrowings. This can be seen below. 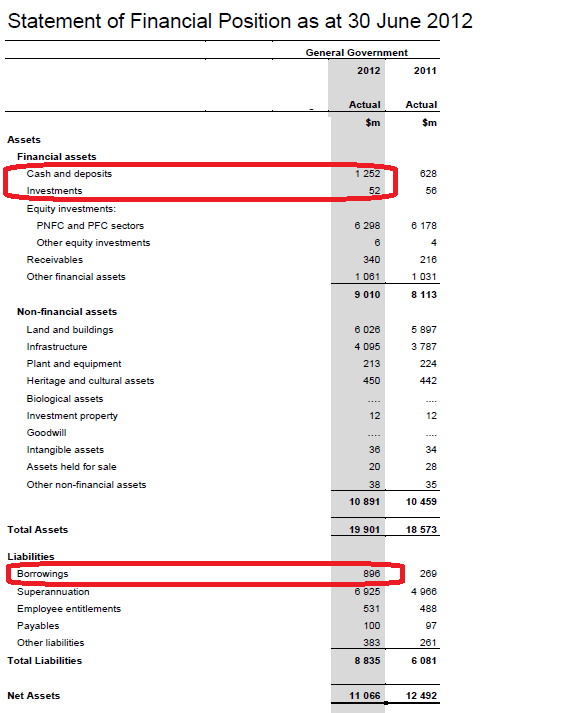 
In future posts we will return to the measurement of net debt and also the broader measure of net financial liabilities  for both GG and TSS, but first the next post will introduce readers to the overall balance sheets for both the GG and the TSS.
Posted by tasfintalk at 13:30