Election dates are now circled on the calendar.


The countdown has started.


The May Budgets will set the scene for some of the economic and fiscal issues that will be canvassed in both State and Federal elections.


An important lead up set of figures was released by the State Government on Friday 15th Feb via its Mid Year results for 2012/13.


The updated expected Budget outcomes for the full year 2012/13 were released in December but the latest figures are the actual figures for the six months ended 31st December 2012.


It is sometimes difficult to draw too many conclusions from six months figures. Other times warning bells sound.


Revenue and/or expenses might not necessarily be evenly spread throughout the year so one can’t be too sure what in store for the next six months.


Both the Finance Minister and the Greens Treasury spokesman have given their brief interpretation of the results.


Mr Bacon said “the Mid-Year outcome contained in the report was consistent with budget forecasts, with a Net Operating Deficit of $201.3 million, in line with the revised Budget estimate of a $326.8 million deficit.”


There’s no basis for that assertion.


That not only is a dumb thing to say, it’s deliberating misleading.


It only occurred as we shall see, because the Government spent very little on new assets, plant and equipment and equity injections into GBEs, far less than what was expected in the Budget.


A cause for celebration?


Mr Morris agrees however: “The good news here is that the state’s financial position has stabilised, we are net debt free”.

Net Operating Surplus/Deficit is an unreliable and easily manipulated measure of sustainability and Net Debt is so narrowly defined, it’s a pointless measure.


An examination of the Cash Flow Statement (CFS) gives the best clue as to what is happening. (This was the basis for the detailed look at the State's finances .


The CFS from the Mid Year report is shown below. The first part being the ‘operating’ and ‘investing’ amounts followed further down the page with the ‘financing’ amounts and the overall summary.
GENERAL GOVERNMENT CASH FLOW STATEMENT 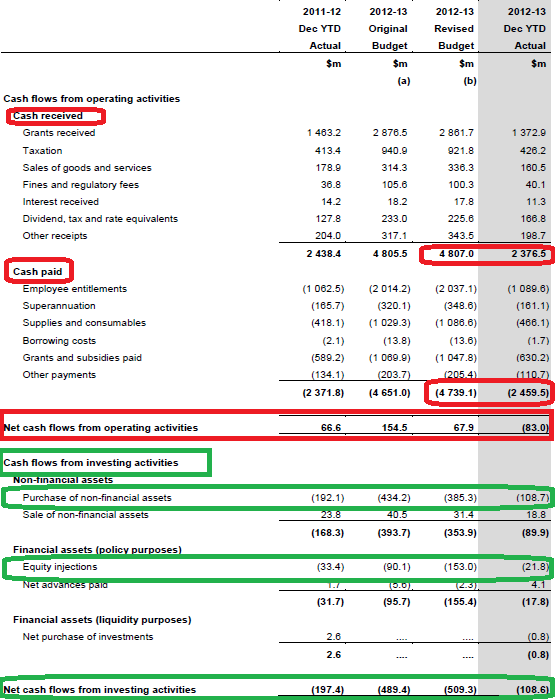 Operating cash received for the six months ($2376.5 million) looks to be on track, roughly 50% of the budgeted amount for the year.


It’s the longer term projections that contain enthusiastic assumptions, which are subject to change as reality intervenes and underlying parameters and economic conditions alter.


Operating cash paid seems to be getting a little ahead of budget, causing the net cash flows from operating to be a negative number, a deficit of $83 million whereas a surplus of $67.9 million is anticipated for the full year.


Included in operating expenses are payments to RBF to cover benefit payments to ex employee members of the defined benefit fund, of about $100 million for 6 months, which as I’ve argued on previous occasions are not operating expenses but more realistically should be considered as  ‘financing’ outlays to meet the Government’s liability.


Without the RBF benefit payments the superannuation expense reduces to $61 million and the net operating amount becomes a $17 million surplus.


But the superannuation expense does not include any superannuation amount for employees who are current members of the defined benefit scheme as the Government only sets aside amounts at the benefit stage. If the Government were required to set aside 9% of salary for these employees an amount of $40 million would have been required taking the superannuation expense for six months to $101 million and the adjusted operating cash deficit to  $23 million, an absolutely awful result.


Despite the reassurances from Mr Bacon and Mr Morris we are a long way from sustainability.


An operating surplus is needed to pay for investing requirements (new plant, equipment, roads, infrastructure, buildings and equity contributions to GBEs) and for financing requirements (paying debt and liabilities).


As a rough goal we need to generate operating surpluses equal to at least 10% of cash revenue, say $250 million in a six month period. We’ve just accomplished an operating deficit of $23 million.


Going back to the cash flow statement, the investing outlays for six months were only $108.6 million, whereas $509.3 million is budgeted for the full year. Purchases of non financial assets (plant equipment infrastructure etc) and equity injections to GBEs are lagging at this stage of the year.


The Government has a tendency to reduce investing outlays whenever cash is tight.


The disappointing operating cash deficit has been more than offset by slowing down investing outlays.


Moving on to financing outflows and inflows below is the rest of the cash flow statement. 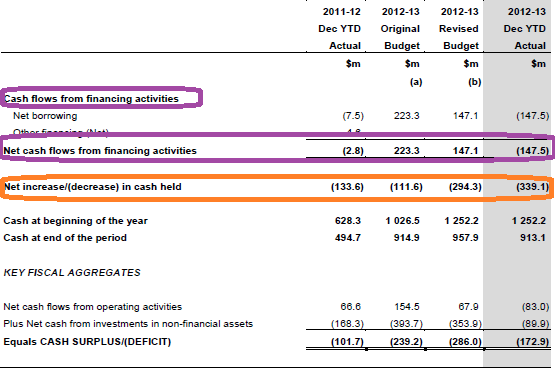 The six months net cash financing results showed a $147.5 million reduction in borrowings whereas an increase in borrowings of $147.1 million is predicted for the full year.


As we saw above, much less than 50% of overall budgeted amounts were spent on investing in the first six months and hence there was more unspent cash which meant the temporary  overnight loan at 31st December was less than had been the case at 30th June.


On 1st July the then overnight loan of $650 million was repaid and come December only $500 million was required to top up deposit and trust accounts to their rightful levels.


As a consequence the net cash flow from financing showed a reduction in borrowings of $147.5 million.


Which in turn meant a greater than expected fall in cash on hand of $339.1 million for the six months period.


Whatever is the temporary amount borrowed, cash on hand increases by the same amount so we are no better or worse off as a result.


The balance sheet following shows both cash and borrowings down over the last 6 months. 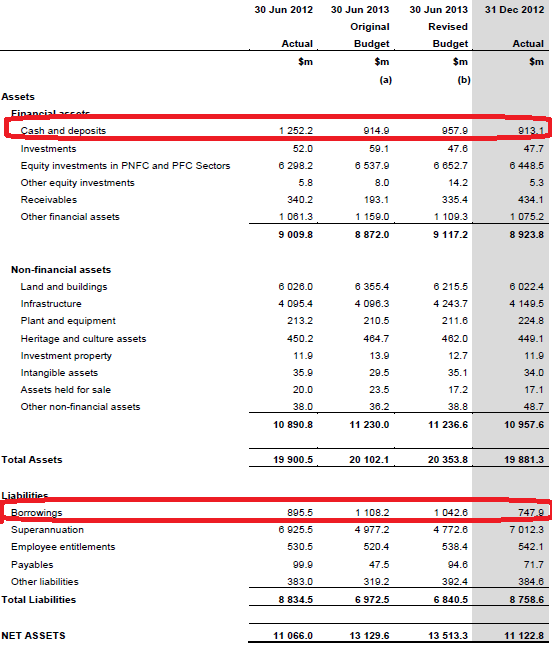 Net Debt doesn’t change as a result of the overnight borrowings and deposit arrangement.


Net debt is a negative $212.9 million (we are still in the black!) as trumpeted by Mr Bacon and Mr Morris but that has arisen, despite worse operating results, simply because the Government has been slow to put its hand into our pockets to spend on necessary and budgeted plant, equipment and infrastructure etc.


Nothing more than that. It certainly can’t be construed as confirmation of prudent fiscal management.
GENERAL GOVERNMENT BALANCE SHEET AS AT 31ST DECEMBER 2012(cont) 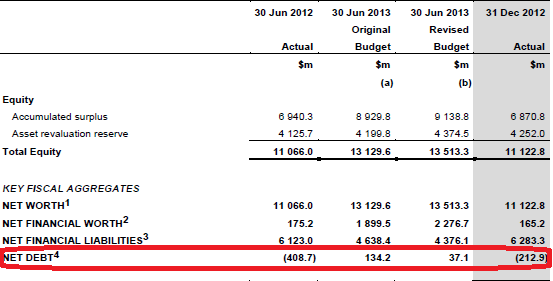 Over the next six months as the Government increases expenditure on investing, cash will run down before receiving an overnight boost on 30th June. Paradoxically we will probably end up with more cash than at present and with more borrowings. At that point we will be in Net Debt, of $37.1 million.


However compared to the fact that we are struggling to achieve net operating cash flow surpluses, a small net debt figure is neither here nor there.


Whether one is adherent of the Austrian school, an austerian, a Keynsian or a Modern Monetary Theorist, for a small service economy like Tasmania which is loathe  to raise taxes and which obviously is not a fiat currency issuer, inability to run operating surpluses is an insurmountable problem.


The only solution is to rely on the Feds.


Which is what we do, relentlessly and unashamedly. This is clearly evident in an appendix to the Mid Year results listing the balances of all deposit accounts that together comprise the Public Account.


There is an account that receives specific purpose grants from the Feds, the AGFMA a/c, often capital grants. RHH and Railyard funding are examples. 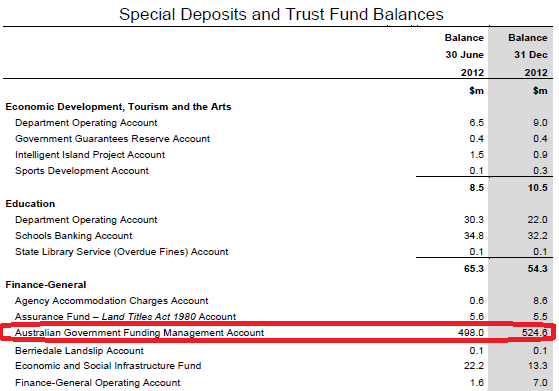 
The total cash at the bank was only $913 million and $500 million of that was from the overnight borrowings.


And $524.6 million of that were Fed grants paid in advance!


We are using the Fed grants which may not have to be spent for a year or two to provide working capital for the Government. 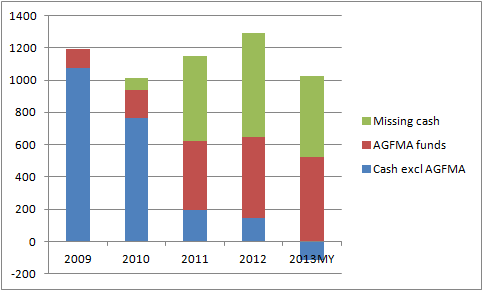 The columns represent the amounts that should be in the bank. The ‘green’ bits represent missing cash that requires overnight borrowings at balance date to square up the accounts. The ‘red’ bits are, increasingly, the unspent Fed funds which we use as working capital. The ‘blue’ bits are our own revenue to spend as we please. In the last six months this has now all gone, overspent by $111 million.


We spent $111 million of the Fed specific purpose grants for other purposes. The following graph may be easier to understand.
GENERAL GOVERNMENT CASH COMPONENTS ($ MILLION) 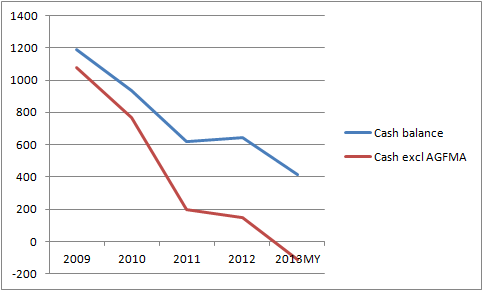 Cash on hand is declining, but without AGFMA it’s a negative number.


Mr Morris remarked “the Budget appears to be returning to an even keel”. An interesting choice of words seeing as though we're underwater.


Mr Bacon said “the Government would continue to be up front about the challenges facing the state's finances”.


Let’s hear it then.


Let’s hear it also from the Opposition who’s Roadmap to Recovery is now in tatters.


The Roadmap had as its cornerstone savings strategy to grow the forest industry rather than put $110 million into FT to close it down, or so it was claimed.


That saving has now disappeared.


Whether or not FT survives in its current form, $110 million will still be required to pay Community Service Obligations and most of the salaries and superannuation of FT employees, because there’s little chance of FT earning much.


The Opposition has just pledged another $30 million to subsidise international shipping.


The simple fact of the matter is that we can barely generate enough operating surpluses to cover investing and financing needs.


It’s a pain having to sound negative all the time but the story we are being told has few links with reality.


And now we are in election mode.


Further reform at the State level is unlikely for at least 12 months.


Instead we will all join a tacit unholy alliance to screw the Feds for a bit more during the Fed election campaign.