Tassie's debt and liabilities : a comparison

Hardly a day goes by without some reference to the levels of public debt engulfing us all, here in Tasmania, in Australia as a whole , in Greece and the Euro zone, just about everywhere.

There’s lots of scaremongering, loads of misunderstandings, heaps of inappropriate comparisons and deliberately misleading use of figures.

The following puts Tasmania in perspective with other States. The figures used are the 2011/12 actuals for each state.


First just a refresher on the terms to be used.


The term debt usually refers to borrowings. Net debt is derived by netting off cash and other highly liquid assets against debt. In some cases the derived figure is a positive number (ie net debt is negative).


Financial liabilities include borrowings but also trade payables, employee benefits such as leave entitlements and most significantly, unfunded superannuation amounts.


Most media reports about debt and debt to GDP ratios here and abroad refer only to borrowings. Broader financial liabilities are generally excluded.


The Tasmanian Government often reminds us of our low net debt, by selectively referring to the GG sector. The following shows how Tasmania compares. 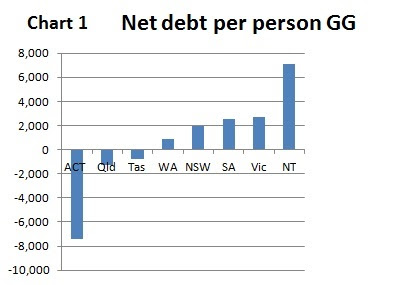 
(Note:  a year later at June 2013 the net debt figure is $16 million, a deterioration of $425 million over the 12 months. However the position in all states deteriorated. Actual figures for all states are not yet available at this stage.)


When one looks at net debt across all the public sectors TSS as a whole, Tassie remains in third lowest spot with $2,350 per capita.  Chart 2 provides the detail. 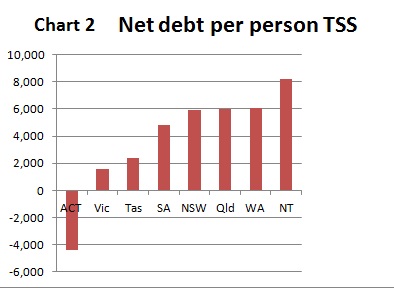 ACT is still the lowest (still with negative net debt) and NT the highest.


The broader measure of net financial liabilities for GG sees Tassie moving to the middle of the table, ahead of SA, ACT and NT. Chart 3 has the details. 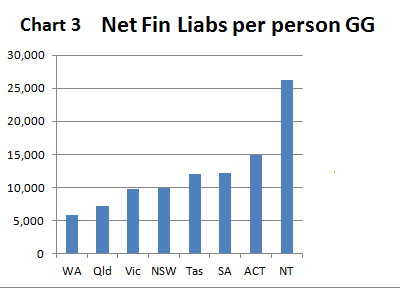 
Comparing levels of debt and liabilities on a per capita basis can be a little misleading. The calculation of GST relativities compensates smaller states for less revenue raising capacity than larger states. Comparing debt and liabilities across states relative to their gross state product GSP (in other words their share of national gross domestic product) may give a more realistic picture.


In the case of net financial liabilities in the GG sector Chart 5 presents the picture. 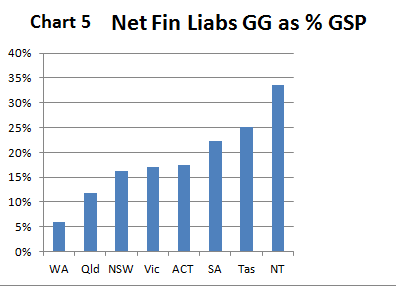 
Looking at net financial liabilities for the whole public sector TSS, Tasmania finally makes it to the top of the table. Chart 6 presents the details. 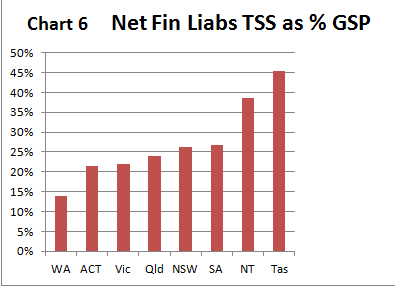 
The composition of financial liabilities is an important consideration. Borrowings always have a refinance risk whereas unfunded superannuation does not. It’s a liability that will be discharged over the next 50 to 60 years. Whilst the present value of the liability is extremely sensitive to interest rate fluctuations as we’ve seen in previous posts, the annual commitment is much more certain. Chart 7 presents the proportion of GG total liabilities represented by unfunded superannuation. 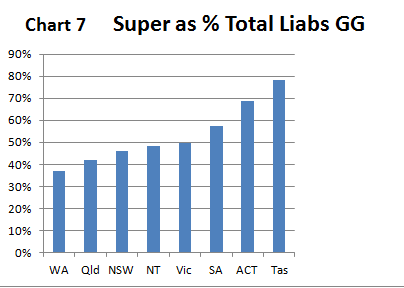 
If one wishes to present Tasmania in the best light the measure chosen will be the net debt in the GG sector on a per capita basis. Ms Giddings chooses this measure when there’s a need to put a positive spin on matters.


·       A proportionally higher than average borrowings outside the GG sector. In other words government businesses carry more debt.


·       A proportionally lower than average amount of GSP per capita.


None of the above makes Tasmania a basket case. The differences merely highlight Tasmania’s vulnerabilities. If anything it confirms that while comparisons between states are interesting and informative, strategies based on achieving a certain level of net debt or a certain ratio of net financial liabilities to government revenue mask the simple need to focus on measures of realistic and sustainable cash flows.


A future post will review the fiscal strategies of the Government and the Opposition.

Earlier posts on this topic may be of interest: