Imagine a company taking over another company with a book value of $89 million ($346 million worth of assets less $257 million worth of liabilities) and just a few weeks later the Directors revaluing the assets downwards by $227 million and the liabilities upwards by $108 million and announcing the CEO was leaving as “the time was right for a change to take the business through its next phase and to provide long-term stability to the organisation”.

It was not immediately clear at the time what was meant by the media release dated 28th June 2013 citing the need for a new CEO to provide long term stability. The recent release of HT’s 2012/13 Annual Report however, has shed some light on the transaction which involved HT taking over Aurora Energy’s wholly owned subsidiary AETV Pty Ltd containing the assets and liabilities of the Tamar Valley Power Station.


Aurora Energy’s 2012/13 financials revealed assets and liabilities including a loan to Tascorp of $205 million were transferred at book value. The net amount of $89 million was treated as a capital withdrawal by Aurora Energy’s shareholders, Ms Giddings and Mr Green who hold the shares in trust for the people of Tasmania.


HT’s Annual Report confirms the shareholders then made an equity contribution of $89 million into HT and the assets and liabilities were received at book value.


HT’s statement of changes in equity shows the introduced equity.

The breakup of the $89 million is revealed in Note 33. 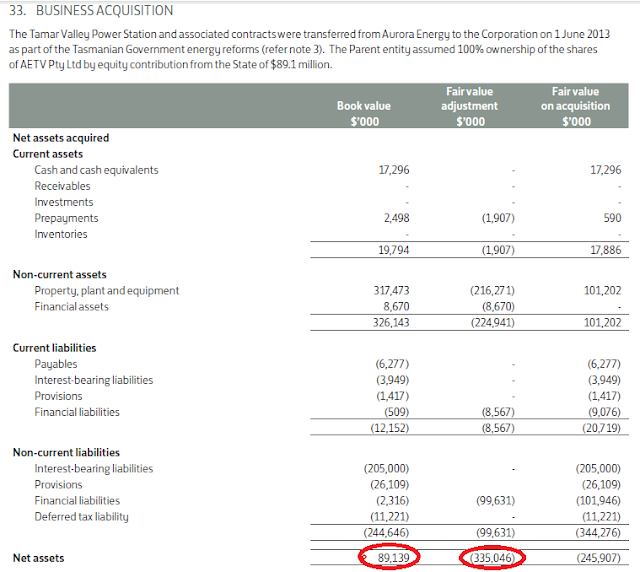 Note 33 also shows the fair value adjustments totalling $335 million. The value of the power plant was written down by $216 million and financial liabilities increased by a total of $108 million. That’s what HT reckoned were the fair values.


The concept of an asset falling to only one third of its book value is possibly understandable as the value is linked to future revenue streams from that asset but getting the financial liabilities so horribly wrong is another matter. Aurora had them on the books at $3 million. HT increased them to $111 million. The financial liabilities inherited by HT principally relate to provisions for onerous contracts and site rehabilitation expenses as per Note 15 covering provisions. 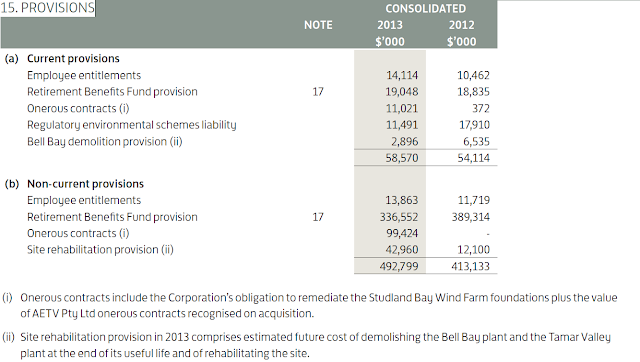 
How did HT account for the fair value adjustment?


However balance sheet values have to be regularly reviewed and in this case the entire goodwill figure was written off. Ipso facto if the reason for the goodwill was the assets were worth less than the purchase price, then the difference must inevitably be an expense if asset values are to be brought into line with fair market values. There are times when some accounting practices appear pretty dumb!!


Note 12 contains the details of the goodwill arising on acquisition and its immediate impairment.

The impairment now appears in the profit and loss statement. Note 2 contains details, part of which is replicated below.

HT was careful to note the transaction resulted from a Ministerial direction. Instead of taking over net asset worth $89 million it received a hospital handpass of extra net liabilities of $246 million. It certainly begs the question as to why the transaction was conducted this way.


Had Aurora sold the assets to HT for what they were worth and not what was on the books Aurora’s tax profits would have taken a huge hit, which in turn would have meant a huge hit to government revenue in 2013/14


The way they’ve done it with the shareholders taking an equity withdrawal out of Aurora representing the book value of certain assets and liabilities and then making an equity contribution into HT, Aurora has ended up with tax profits that will ensure higher government revenue this year and probably later years because of the lagged effect on tax amounts that would have ensued in the event of reduced profits and possible carry forward tax losses.


It also explains the oddity of the transaction occurring at midnight on the 1st June. Had the transaction been delayed a month as probably would have occurred were parties dealing on an arm’s length basis, Aurora would have been required to adjust the values of the assets and liabilities at 30th June which would have meant it and not HT would have taken the bottom line hit.


It’s a little surprising that the deterioration in asset value and increase in liabilities totalling $335 million all occurred in the space of 12 months for it would have been incumbent on Aurora’s directors to review values at least as recently as 30th June 2012 if not later. Directors have a responsibility to continually review solvency and asset values etc. For instance in the case of the recent Gunns debacle the voluntary administrator observed that had Gunns’ directors been a little more vigilant than just a once a year revaluation at balance date, Gunns may well have been found to be trading insolvently much earlier.


Presumably however the Auditor General is happy with what has transpired although we are yet to see his report to Parliament on all GBEs and SOCs usually tabled in November.


HT whilst suffering the ignominy of a massive hit to the accounting bottom line, will nevertheless be able to maintain revenue streams to the government to the extent they’re they’re based on tax profits and not accounting profits.


HT has been the bunny in this instance, the fall guy, having to take over net assets at way beyond their value. That appears to be what has happened. Having the same two shareholders in both companies and a Ministerial direction makes it all possible.


The staged release of information from HT as if feeding chooks has been a little devious although excusable as it has tried to make the best of a situation not of its making.


A week or so ago HT announced its underlying profit was $238 million. Champagne corks were popped, backs slapped and HT talked up the returns to government which to be fair are of crucial importance.


The financials just released indicate the accounting profit was a lot lower, in fact a huge loss of $248 million before tax, brought about principally by the massive write downs of the assets and write ups of the liabilities transferred from Aurora Energy (a total of $335 million) and the write down of other generating assets as a consequence of the likely repeal of the carbon tax/emission trading scheme ($149 million).


As a quick aside the write downs in the value of generating assets was much greater, as the asset revaluation reserve of $321 million created last year in expectation of a golden age for HT following the introduction of a carbon tax which enhanced the value of clean generating assets has now been reversed. Only part of the write down, or $149 million, being the amount in excess of the revaluation reserve reversal, has been brought to account as an expense in the P&L statement.


HT’s loss meant it was immediately on the back foot and it went to great pains in a media release on 17th October to explain different profit figures, the accounting figure vs the underlying profit figure. No mention however of the third figure of tax profits used to calculated income tax equivalent payments to government.


An esoteric explanation followed but it was confusing and misleading. But also quite revealing. The following table from the media release contains the details. 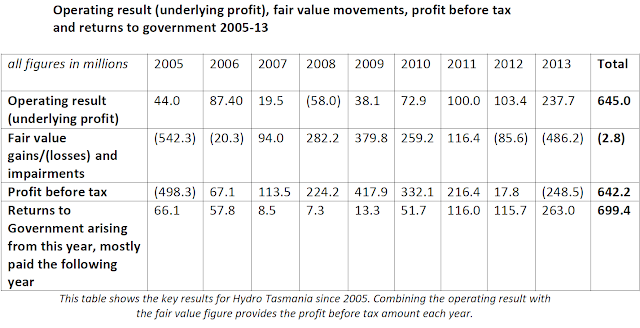 The table shows the underlying profit being less volatile than the accounting profit but over a 9 year period there was little difference, only $2.8 million. This is a coincidence rather than a definitional certainty as implied. Had the transaction with Aurora been conducted at arm’s length at fair value the loss in the latest year would not have been $248 million but a profit of $88 million and the accounting profit for 9 years would have been $975 million compared to underlying profit of $642 million. That would have blown the implied thesis out of the water.


The media release explains how dividends are calculated at 49% of underlying profits but completely ignores how the other major item paid to government is 30% of the taxable income. The amount of tax payable in respect of 2012/13 income will be $91 million which is obviously much more than 30% of underlying income.


In fact the payments to government as per the table are in excess of underlying income, especially over the past five years which almost certainly confirms the burdens imposed upon a capital hungry business like HT are not sustainable. The Treasurer’s instruction covering GBE dividend policy which appears in this instance to have been more honoured in the breach than the observance states inter alia, “the Board should have regard to the progression towards, or maintenance of, an appropriate capital structure for the government business.”

Something's got to give.


HT has gained a commitment from the Government to review its capital structure in 2013/14 and assess the sustainability of its balance sheet, presumably to take the business through its next phase and restore stability to the organisation following the departure of Mr Adair. The Annual Report noted this may require an equity injection to retire a portion of debt. For the strongest contributor to the Government’s revenue stream from GBEs and SOCs to admit it has too much debt is a problem for the State. Without the revenue streams from electricity companies Tasmania as a State would be fiscally non viable.


What’s the future hold for HT?


The response from the mediocrity currently masquerading as an alternative government was one of outrage that HT sang about the underlying profit figure then a week later revealed the huge loss. No mention about how they intend to address the important issues confronting HT. If the Libs succeed in lowering electricity prices, maintaining crucial returns to government and reducing HT’s debt it will rank alongside the loaves and fishes achievement.
Posted by tasfintalk at 19:58