Missing millions and the law of triviality

Parkinson’s law of triviality briefly states says the time spent on any agenda item is inversely proportional to the sum involved.


Since 2007/08 cash deficits have been recorded in every year, totalling $1 billion, deficits that have been funded by plundering amounts set aside for other purposes.


Whilst it is commendable to boost aggregate demand by running deficits, the reality has meant Tasmania has been spending all available cash because it’s wedded to the idea that debt is undesirable while at the same time refusing to reform the unsustainable model to allow borrowings, which might provide scope to achieve more desirable economic and social outcomes in the future.


It’s a model we’ve been following for years. It’s about to reach its used by date.


In the period leading up to the global financial crisis extra funds for government spending came from internal borrowings, almost exclusively from the SPA a/c set up to accumulate enough funds to extinguish the government’s unfunded superannuation liability by 2035.


By 2012 the SPA balance was supposed to be $1.5 billion, but it all had been internally borrowed and spent elsewhere. In fact over the entire period of SPA’s existence from 1999 there was virtually no cash backing as the following graph shows. 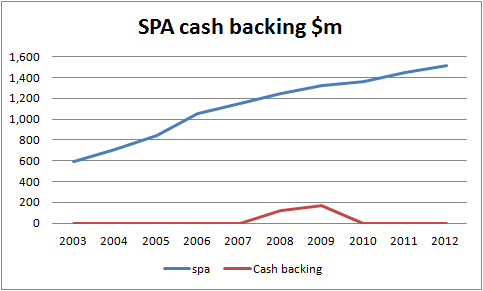 Only in 2008 and 2009 was there a small amount of cash backing for the SPA a/c due to the windfall proceeds from the Hobart Airport sale.


In 2003 there wasn’t any cash backing for the $590 million that had been appropriated to help extinguish the unfunded superannuation liability.


Nothing was there except a pile of IOUs.


There was no foreseeable way that the internal borrowings would be repaid because that required cash surpluses.


It was decided to tear up the IOUs and close the SPA a/c.


The internal borrowings were written off as uncollectable.


Another reason the SPA IOUs would never be repaid was the government’s appetite for internal borrowings showed no signs of waning as it started borrowing from other accounts.


The following graph details internal borrowings from other government accounts. 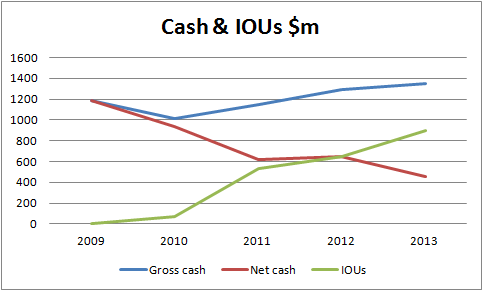 
The IOUs for the missing cash accounted for all of the special deposits administered by Finance-General (FG--part of Treasury) by the end of 2013 as shown below. 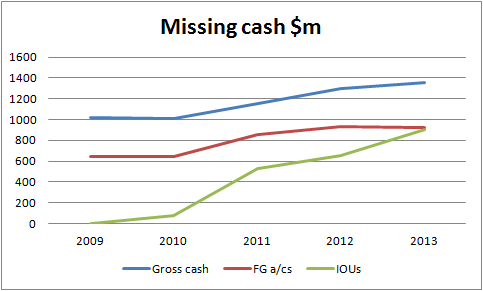 FG accounts, the special deposit accounts (the red line) comprise roughly 2/3rds of all government cash (the blue line). The balance, the difference between the red and blue lines, is essentially the department and agency operating accounts.


The green line represents the internal borrowings. In 2009 all of FG’s a/cs were fully cash backed. By 2013 none were.


The increase in IOUs from FG a/cs coincides with the cash deficits since 2009 as shown by the following graph. 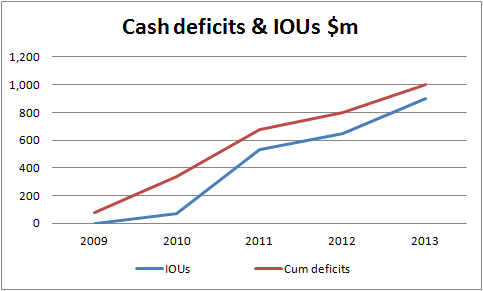 As is evident the cumulative cash deficits have almost all been funded by internal borrowings.


The pattern of cash deficits over the years is instructive. The following graph contains the details. 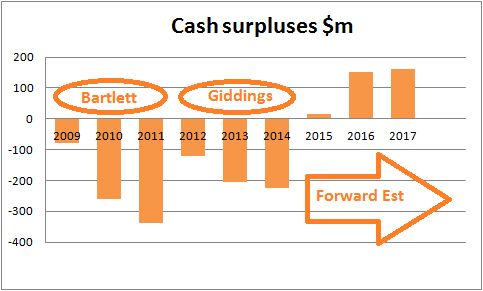 The three Bartlett years are followed by three Giddings years (2 actuals and 1 budget), then by three years of forward estimates.


The need to find a solution for the looming budgetary crisis which Mr Bartlett masterminded coincided with his desire to devote more time to parenting, and fortunately for Tasmania he pursued the latter, leaving Ms Giddings to discover the barn was empty, notwithstanding she had been sitting round the cabinet table with Mr Bartlett for his entire premiership.


Faced with the looming emergency Ms Giddings went to work and reduced the cash deficit to $120 million in 2012. The deficit increased to $205 million in 2013 and is budgeted to increase to $223 million in the 2014 year.


All financed by internal borrowings.


But let us worry no more because the forward estimates show surpluses in the 3 subsequent years.


These three years of estimates are the basis for both the government’s budget and the opposition’s plan for a brighter future.


When faced with a budget emergency Ms Giddings was only able to reduce the cash deficit to $120 million.


Yet we are expected to believe happy days aren’t far away.


Take the case of the 2013 cash deficit which first appeared in the 2010 budget as a forward estimate. For the next 2 years the forward estimate for 2013 was revised and in 2013 we got to see the actual figure. The following graph contains the details. 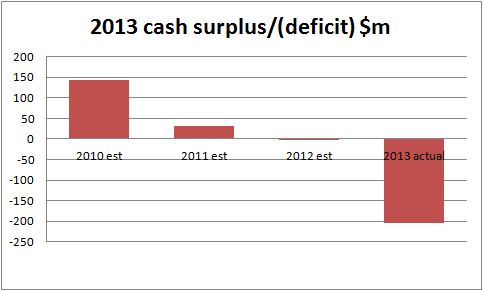 
The latter was only achieved after capex budgets were slashed by over 50%.


Over the last 4 years, funding all employees’ superannuation would have worsened the deficit by $240 million.


Which means the internal borrowings would have been $240 million more.


Which means we would have run out of cash already.


Isn’t that an indication we are unsustainable?


We’re hanging on for grim death surviving by internal borrowings and because the defined benefit superannuation arrangements have allowed payments on behalf of current defined benefit members to be deferred.


Surely we should be taking advantage of the deferral to ensure the system is sustainable for when payments are due in the future?


The government’s fiscal strategies are mostly beyond being achievable.


Mr Hodgman didn’t even bother with any specific fiscal strategy goals in his latest plan. Instead he chose to retreat behind his firebreak of mediocre minders and chant slogans.


Ms Giddings has demonstrated she doesn’t have an abiding interest in making the government into a sustainable operation.


Nor does Mr Hodgman. He’s increasingly looking like a boy on a man’s mission.


During the past five tumultuous years there has been no serious discussion, let alone changes, to the role of the State government. It is still considered to share the same macroeconomic public policy space as the Federal government, of solving unemployment and providing help and assistance to those in need, as well as all the other functions as a member state of the federation.


The current budget model as practiced by Ms Giddings and endorsed by Mr Hodgman is starting to hinder rather than help the State find a sustainable path.


Heading towards a State election neither leader, nor third man McKim for that matter, has addressed the issue that by June 2014 $1.1 billion will be missing from accounts intended for other purposes, that further internal borrowings are well nigh impossible and no one has put together a proposal to reform our broken down budget model.


Mr Hodgman has been in opposition for an eternity. His plan for a brighter future will not live up to its name. It will be a Stephen Bradburyesque victory rather than the dawn of a new era.


Giddings and McKim have sat around the cabinet table for the last 3 years. What on earth do they discuss at budget preparation time if they don’t discuss the unsustainable level of internal borrowings over the past three years, borrowings that will eventually have to be repaid unlike the SPA IOUs which were simply thrown in the bin?


The lessons from the SPA debacle have been lost already.


The current public account set-up with a dual system of a consolidated fund and a series of special deposit and trust accounts has proved to be a system that few understand, least of all most of the politicians who vote on the budget each year and who make it glaringly obvious that anything more complex than a statement of receipts and expenditure from a country footy club’s ladies auxiliary is beyond them.


The government has talked about reforming the financial management system but after 3 years is yet to table the amending legislation.


The current system appropriates funds regardless of whether cash is available, which accounts for special deposit and trust a/cs with no cash backing. By June 2012 almost $2.2 billion had been appropriated (including specific purpose Federal grants) in excess of available cash. Even with the scrapping of  the SPA account, at June 2014 there will be $1.1 billion more funds appropriated than cash available


Why don’t Mr Hodgman and Mr Gutwein say something? Don't they understand?


We have an incredibly dumb system where funds are appropriated for a particular year and then the government decides, cash willing, to spend an entirely different amount, because it can, because it’s been appropriated in an earlier period.


Few understand the difference between appropriations and cash outlays.


Even fewer say anything.


The Auditor General in a presentation to parliamentarians two years ago following the release of his analysis of the Treasurer’s Annual Financial Report for 2010/11 drew members’ attention to the fact that cash excluding Australian government funds received in advance was getting dangerously low.


A year later the Auditor General in his formal publicly available analysis of the State’s financials, presented a misleading update to the graph showing increased cash balances in 2013 reflecting the new system of overnight borrowing to repay IOUs.


It was a 24 hour mirage not obvious to a lay reader.


Hopefully the Auditor General’s belated release of his analysis of the 2013 State’s financials will contribute to the public debate about the IOUs.


In any event, what can’t last forever, won’t.


Mr Hodgman appeared in a 5 second news grab the other night talking about a commission of audit to review the role of government boards.


What about the missing billion dollars Will?


The law of triviality has many devoted disciples.
Posted by tasfintalk at 13:46