The plantation feedstock shortfall for the proposed pulp mill is still not widely understood.


Just consider the following, first a quote from Martin Ferguson’s recent Review of the Tasmanian Private Hardwood Plantation Estate and second an extract from the last detailed presentation given by Gunns.


This is what Ferguson had to say about the Tasmania’s pulp mill feedstock.


“Defining the current private hardwood plantation estate is complex due to range of ownership structures that were largely developed as a result of MIS. The area also varies by reporting periods, methods and planting scheme. However, a reasonable estimate of the private hardwood plantation estate in Tasmania is 177,000 ha and that the harvest from this estate could peak at 2.5 to 3.0 million cubic metres per annum. The sustainability of this production capacity is difficult to determine due to the uncertainty that exists around the re-establishment of plantations in the future.


The majority of the private hardwood plantations are on Freehold land (106,000ha) with leasehold approximately 50,000 ha and the balance on leased Crown land. The bulk of the plantations (approximately 120,000 ha) were developed by MIS. While MIS was initially successful at establishing the resource it created uncertainty for the processing industry as there was no guarantee of replanting which is not attractive to large domestic investments like a pulpmill, even though the scale and quality of the plantations are ideally suited to this type of processing plant.”


This is what Gunns said would be available as per their last presentation to analysts in February 2012. 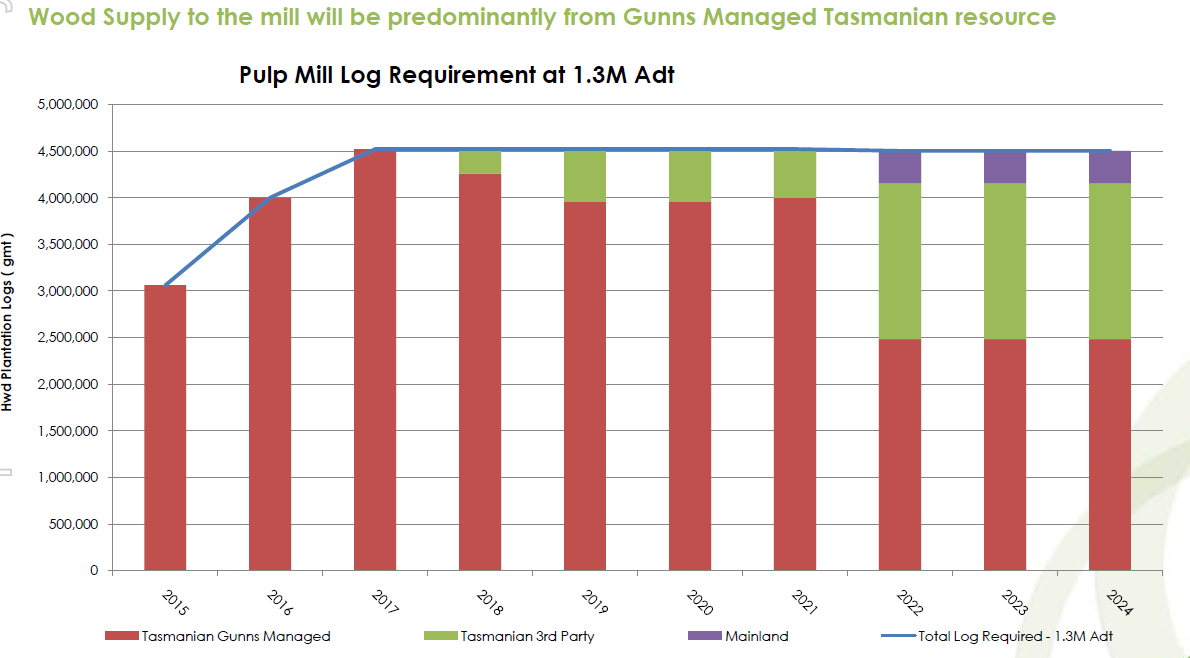 Gunns said 4.5 million tonnes would be available in 2017. That is what is required to make 1.3 million tonnes of pulp, the proposed capacity of the mill.
It’s pretty easy to conclude that there will only be about half the required resource for the pulp mill available locally, and that assumes replanting.


After all those years being told we had a world class plantation resource the truth is still slow to filter out.

The cost of the proposed mill also needs updating. Martin Ferguson who, judging by the latest news has been engaged to help sell the mill permit and was captured by TV news referring to a $2.3 billion project. That of course excludes the plantations, land and infrastructure that a proponent will need. These amount were previously outsourced to MIS investors.

The last Gunns' presentation to analysts referred to above, outlines a project with an enterprise value of $3 billion.

Maybe Martin Ferguson needs to bring himself up to date.

Email ThisBlogThis!Share to TwitterShare to FacebookShare to Pinterest
Labels: Gunns