Is this the last handout?


Last July one of the countless pre election promises made by Kevin Rudd was $7.5 million to help Ta Ann Tasmania (TAT) build a new plywood mill.


Relying on endemic amnesia amongst voters, the shameless local member elected at the same time as Kevin Rudd’s brief reappearance thankfully ended, last week was able to proudly announce that he had secured the $7.5 million handout for TAT.


TAT, it was claimed will contribute $8.3 million towards the construction of the $15.8 million facility in Smithton.


That’s a bit of an overstatement as $5.7 million is due soon, also from the Australian Government, as final settlement of the $26 million for surrendering 108,000 m3 of its annual wood supply as per the Tasmanian Forests Agreement.


The Smithton plant go-ahead came hard on the heels of the release of TAT’s 2013 financial statements (its financial year ended on 31st December) as well as that of the ultimate holding company, Ta Ann Holdings Berhad, listed in Malaysia.


The reports offer an intriguing look at how the group operates.


TAT only has one customer for its veneer products and that is the plywood manufacturer in the Ta Ann group. TAT has always run at a loss. The Directors categorically acknowledge this state of affairs and don’t usually bother to record the effects of losses on future tax payable in the event of future profits because such an eventuality was always considered unlikely.


The tax losses previously assigned to the bin were quickly derecognised to use the accounting jargon. Most of the tax losses were needed to soak up the effects of the government handout.


It appears that other arrangements were used to increase the loss in expectation of the windfall viz:


·       adjusting the sales figure between TAT and the parent group


Sales for the year were approximately $9 million. Given about 45,000 tonnes of veneer product were sold this implies a selling price of only $203 per m3, catastrophically low for a value added timber product built with government help as a beacon for others.


There are no receivables owing between TAT and the parent group, implying that receipts as per the cash flow statement should be the same as the $9 million revenue referred to in the last paragraph.


But receipts from the only customer as per the cash flow statement were $17 million.


A sales adjustment was made, via a book entry. Sales were reduced and the payment was instead treated as a loan from the parent group.


Without the adjustment sales would have been $17 million or about $390 per m3 of veneer product, which one would have thought was the bare minimum reasonable price.


After the adjustment sales were recorded at $203 per m3.


There may have been a basis for writing back sales by $8 million or almost 50%. Profit shifting springs to mind.


Inventory in cases like TAT is usually recorded at cost which includes raw material, labour and factory costs. In the event this figure exceeds the market realisable price inventory on hand is written back by an amount which becomes an expense for the period. With sales values being written back it logically follows that remaining inventory, which increased by over 23,000 m3 during the year was also written back.


Profit was also reduced with FX losses. These were recorded as book entries in the loan account between TAT and the parent group, which suggests that if TAT made a loss the parent made a profit?


Hence the disappointing sales year with only 46,000 m3 of product sold to its parent became a disaster with a few book entries. But it was just what the doctor ordered as losses were required to offset the windfall gain of the government handout, which will be added to with the receipts of further amounts of $5.7 million and $7.5 million.


Adjusted sale prices have shown a significant decline over the last three years whereas prices before adjustment and cost of sales are more modest in their fluctuations. 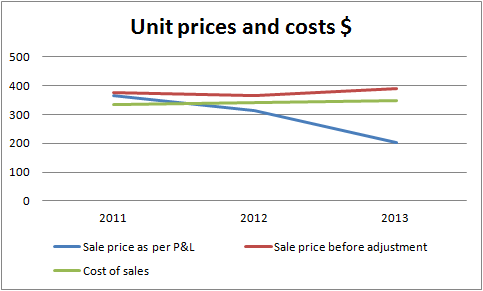 Indications are the parent’s plywood division of which TAT is a part, incurred a big loss in 2012, but almost broke even in 2013. The division contributed 44% to group revenue but minus 2% to group profits. In other words it made a small loss.


With losses in the plywood division why make profits in the outlying subsidiary TAT? Hence profit shifting?


The $20.3 million handout helped restore cash balances. But it was soon spent with $9.6 million being paid back to the group. Some even went to restock TAT’s wine cellar as reported here, satisfying at least, the spirit of TFA by spreading the benefits.


The loan account with the group didn’t change much as the $9.6 million repayment was largely offset when the sales adjustment of $8.4 million was treated as a loan.


One of the perennial issues with the forest industry is the matter of residues. It is a little puzzling to find no reference to residue sales in the accounts. The only revenue recorded is veneer sales to the parent company. Maybe residue disposal is an expense hidden in cost of sales or maybe residues are used elsewhere?


One difficulty arises because the two entities have different financial years, TAT adopting a calendar year and FT having a July to June year.


FT publishes the wood volumes for high grade domestic peeler logs, most of which end up with TAT, and the average for 2011/12 and 2012/13 of 212,000 tonnes should arguably give a rough approximation of TAT’s raw material inputs for the 2012 calendar year.


According to parent company figures veneer production for 2013 was 69,000 m3. There’s obviously a wastage factor and a drying factor. From green timber to dry woodchips the drying factor is 50%. It may well be similar for veneer products. Which suggests wastage is 33%?


FT also reports an estimated mill door delivered price for TAT timber at $62 per tonne (the actuals are probably lower).


After harvesting and cartage FT may end up with $20 per tonne at best which given TAT’s revised quota implies $5 million to FT .....which won’t cover FT’s costs including roading and replanting.


The end result for $43.5 million of government money to a group worth AUD $311 million which made after tax profits in 2013 of AUD$28 million is a few local jobs processing immature sawlogs leaving a miserable return after profits are shifted overseas when we were promised  value would be added to timber otherwise destined for the woodchipper.


The TAT experiment so far has failed.


The prediction of a future windfall is starting to sound like a Tony Abbott pledge.
Posted by tasfintalk at 14:56