The latest financials show an operating profit before tax of $127 million (highlighted in purple), on turnover of $1.8 billion. 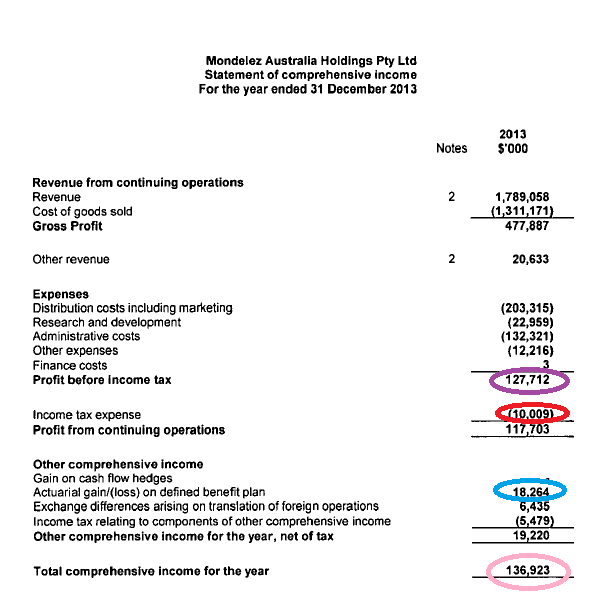 Cadbury is part of a much larger group of companies who share profits and losses within the group. The head of the group pays income tax for the whole group. Group members compensate the head company for their share of tax which in Cadbury’s case was only $10 million (highlighted in red) or 8% of its operating profit. More than Google maybe but not an extravagant amount.


This left Cadbury with $117 million profit after tax.


If any evidence is required that Cadbury doesn’t need government assistance then check the figure of the $18 million gain (highlighted in blue) on its defined benefit superannuation plan. In the previous year the value of its unfunded liability as employer was $10 million. This liability has now been wiped out. The latest actuarial assessment suggests Cadbury as employer has over funded its share. This will be reflected in reduced employer contributions in the immediate future. This contrasts with the case of the Tasmanian State government which has a $5 billion unfunded liability. It pays nothing towards funding current employees. It only pays when current employees retire and require a benefit payment.


The level of profit doesn’t always indicate the cash available to spend on capex items.


The following table reconciles the operating profit figure with the cash from operations. 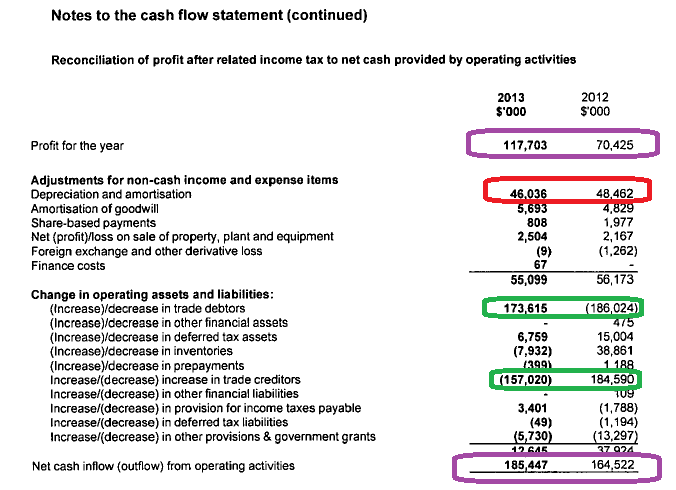 
The other items of note in the table are the movements in receivables and payables (highlighted in green). In this case the reduction in receivables (or debtors) of $173 million is not much different to the reduction in payables (creditors) of $157 million. The difference of $16 million helps explain a further part of the discrepancy between operating profit of $117 million and operating cash flow of $185 million. The point here is that profits may not be reflected by cash if there has been an increase in receivables over the year or a reduction in payables. Conversely if debtors are reduced and/or payables increased then operating cash will be much greater than operating profits.


The rather large movements in payables and receivables mainly relate to transactions between related parties in the group. The following two tables show this:


This confirms the large amounts of operating cash that flow around the group.


But what about the other cash? The amounts spent on investing (capex) and financing (loan repayments, dividends etc)? 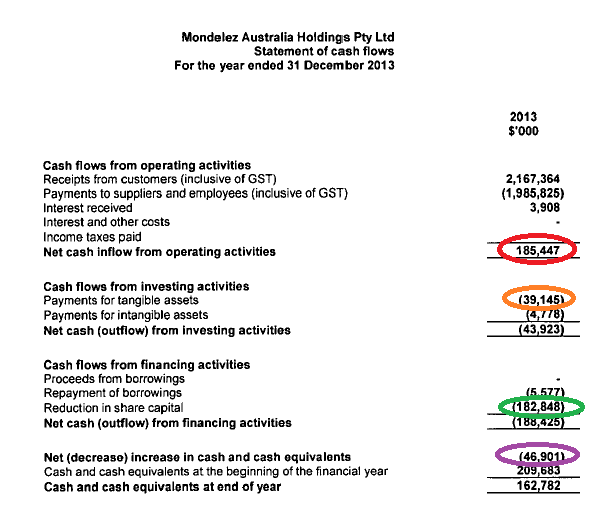 
The payment of $182 million to its owner follows a similar payment in the previous year of $50 million. Hard times indeed.


Accountants have 101 ways of shifting money between group members. It could be via profit shifting, via receivables and payables, as a dividend or in this case as a reduction in the issued capital. A share buy back in other words. Increasingly a sign that companies have too much cash and too few opportunities.


Cadbury’s balance sheet reflects the strength of the company. Almost $1.7 billion in assets (circled in yellow) with borrowings of only $1 million (circled in red). 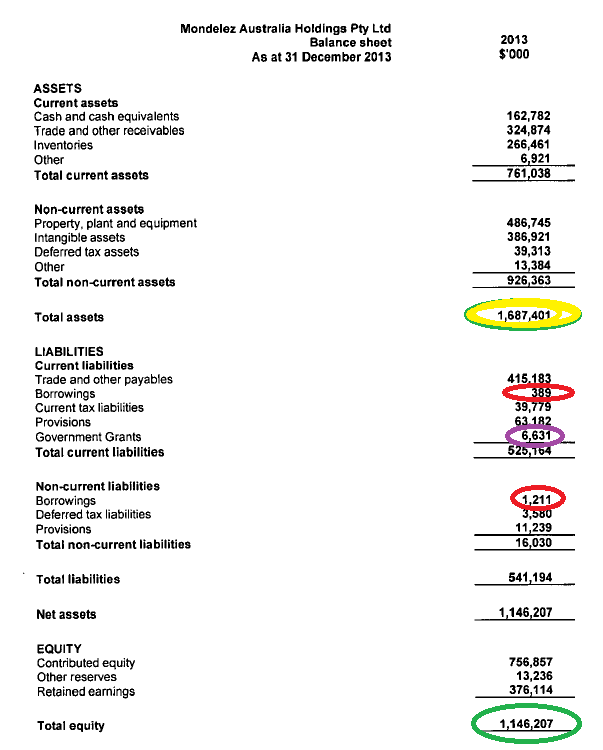 The balance sheet indicates Cadbury is no stranger to government handouts. Included in liabilities are government grants of $6 million. Almost certainly this reflects a government grant, probably a capital grant that has not as yet be spent. When spent it will probably be included as income, less any depreciation, so that the group can then pay 8% tax on the net amount.


The Feds knocked back a request for $25 million from SPC Ardmona at Shepparton because its parent company Coca Cola Amatil was loaded. This case is different. Cadbury itself has oodles of cash. It can easily fund a $16 million capex outlay from one month's operating cash surplus. It hasn’t any borrowings. Virtually all cash surpluses are flowing back to the parent. It has remitted $232 million to its parent over the last 2 years.


The rationale for handing cash to Cadbury has been shifting.


The original justification was that the grant was for capex as part of tourism infrastructure. Apparently tourist visits have no promotional outcomes for Cadbury which may lead to increased sales of Cadbury products. The only effect, so it appears is to assist the wider tourism industry and therefore requires a government handout. Noblesse oblige doesn't apply.


Senator Abetz recently shifted ground away from the tourism infrastructure argument (gosh I thought it was only Clive P who did that) when he said "We will not be diverting money from a project such as Cadbury, which will be creating 200 jobs that will require an extra 600,000 head of dairy cattle in Tasmania." Eric being loose with the truth again. There are only about 150,000 dairy cattle in Tasmania producing about 850 million litres. Current manufacturing capacity might cater for as much as 1.5 billion litres which certainly won’t require a doubling of the herd let alone a quadrupling. Cadbury accepts only a small portion about 12% of State production. Its suppliers milk less than 20,000 cows so an additional 600,000 cows is unlikely.

The case of cash for Cadbury is non existent now that Tony Abbott has no qualms about promising one thing and delivering another.