The last of Shree

Shree Minerals’ problems are pretty evident from a glance at the 2014 financials issued late in September 2014.


The first striking figure is the sales figure for the year, only $8.6 million.

That works out at only $66 per tonne.


Shipping costs of at least $20 per tonne must have been paid by the buyer, Frost Global.


Given 3 boatloads over 6 months when prices were dropping like a stone, the final boat load in June 2014 probably sold for only $50 per tonne or so, before shipping costs.

Quarterly reports to the ASX suggest the first boatload in January fetched $88 per tonne but the next two averaged only $56 per tonne.


The buyer receives a discount to prevailing world prices as compensation for providing working capital to Shree which further depressed prices received by Shree.


The above table also indicates that 224,000 tonnes of ore were mined which implies about 93,000 tonnes was unsold, inventory on hand in other words, of which about 22,000 tonnes was crushed and screened


The second telling figure from the financials is the value of the inventory on the balance sheet. 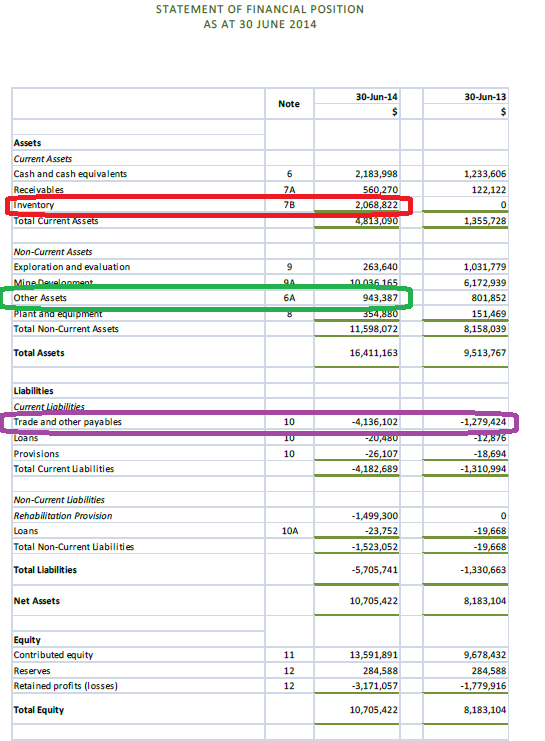 
Note 7B gives the details.


Transport and port costs are about $30 per tonne and the  royalties to the government a further $2, theoretically.


The working capital advanced by Frost Global to Shree was intended to be repaid using proceeds from the first 8 shipments.


A breakup of Trade and other payables is provided by Note 10. Trade creditors are the local contractors.  The Frost Global payable is included under Advance.


Since 30th June 2014 shareholders have tipped in another $1.6 million so the financials suggest that there will be enough cash to pay the Trade and other payables in full including Frost Global. Good news for local contractors provided they didn’t gear up in expectation of a job for 10 years.


However Shree won’t have any cash left for working capital should iron ore prices pick up.


The balance sheet above also includes a figure of $943k under Other assets. Note 6A confirms this is cash set aside for site rehab expenses.

Whether it will be enough is another matter.


The directors have managed to extract $1.35 million in salary and benefits from this loss making company over the last 4 years. Almost all of this, $1.2 million in fact, has been contributed by Australian taxpayers as cash R&D concessions.


Small loss makers take their R&D in cash rather than claim a deduction for 150% of R&D expenditure.


The following cash flow statement shows $435k was received in the 2014 year. 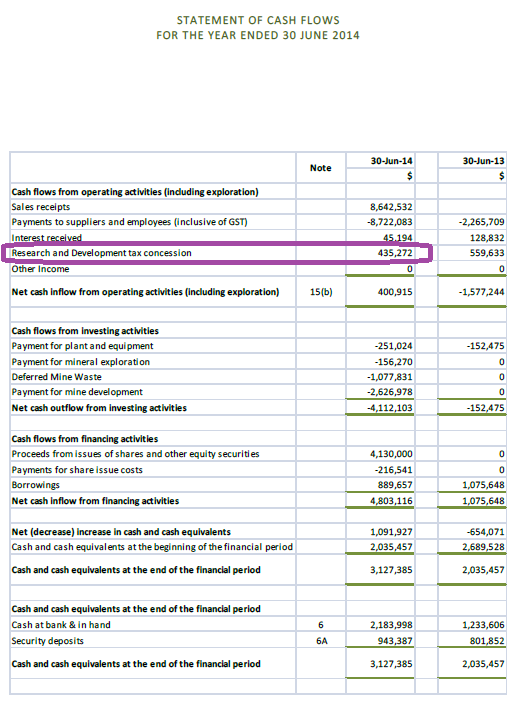 This can also be seen in the P&L statement, the first table above, as a negative income tax expense, in other words a reduction in the loss for the year.


It’s quite an amazing achievement that while there appears to be sound public policy arguments that governments are underfunding R&D, Shree has managed to extract $1.2 million in cash R&D grants for digging a hole in the ground in an environmentally contentious area.


What a clever country we are.
Posted by tasfintalk at 17:59

Email ThisBlogThis!Share to TwitterShare to FacebookShare to Pinterest
Labels: Shree