Why Bob Gordon had to go?

The seemingly pointless inquiry investigating the sale of the Triabunna mill to Graeme Wood and Jan Cameron in July 2011 rather than to Ron O’Connor and the Aprin Group has brought to light a lot of correspondence and emails , now all accessible on the inquiry website .


Not much we didn’t already know.


One exception was a letter (reproduced below) from Treasury Secretary Martin Wallace to the Department of Economic Development Secretary Mark Kelleher dated 16th June 2011 which revealed a little more detail on the failed Aprin deal and maybe why Bob Gordon's retirement occured a little earlier than otherwise planned.


The Tasmanian Development Board which fell under aegis of the then Department of Economic Development wanted to lend Fibre Plus (Tas) Pty Ltd (part of the Aprin Group) $6 million to assist with the purchase of the Triabunna mill.


Treasury were given one day to comment on the proposal.


Based on a prepared paper, the Board believed the continuing operation of the mill was “crucial to the viability of the local economy of Triabunna and the southern Tasmanian native forest industry”.


The Treasury Secretary found this assertion was “not robustly supported by rigorous evidence in the Board paper”.


Furthermore it was pointed out “it is not clear the industry will be viable on an ongoing basis even if the mill is retained.”


Gunns’ CEO Greg L’Estrange has copped a bit of flak for supposedly selling out the industry by accepting cash from Wood and Cameron.


But the Aprin Group, after ten of the best years it’s ever likely to have was not exactly in a state of robust financial health.


“The parent company, Aprin Group, has been the recipient of around $2.6 million in financial assistance from the State and Australian Governments since 2007. It has also produced operating losses over the last four years and is highly geared.”


Bob Gordon had negotiated an agreement with Aprin which “would effectively result(ed) in Forestry Tasmania underwriting the proposed loan by providing a guaranteed level of revenue....... (however) the risk of adverse fluctuations ......would be fully borne by Forestry Tasmania.”


“......in the event of default, very limited security is available to the Government to recoup its loan.”


A highly geared loss making private rent seeker with limited backup security being propped up by an insolvent GBE.


Can it get more ridiculous?

Bob Gordon lasted a bit more than a year before his retirement was announced.


At least Treasury were able to see the wood for the trees.


A parliamentary committee is usually supposed to reach conclusions based on evidence before it, so it will indeed be interesting to see if it concludes anything about the need for a mill when the Government’s principal advisor, the Treasury is not convinced, and no evidence was produced to the contrary. 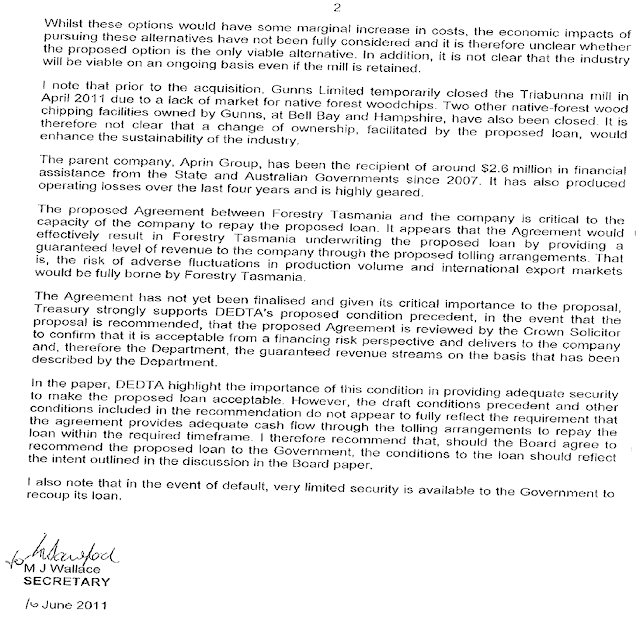