The lynch mob is baying for blood. Running down the dams during the carbon tax years is the accepted reason for our current predicament. It’s all the fault of the bean counters and traders who have hijacked the running of Hydro.

No need to bother checking evidence, Hydro Tasmania’s mismanagement is responsible. Even Energy Minister Groom, tiring of the political pressure, is starting to distance himself from Hydro.

But what if the generally accepted version is wrong? Sure, Hydro’s current board and management have questions to answer, but what if the whole Basslink deal was a dud destined to fail, where once a decision was made in principle to lay the Basslink cable, the need to get the project across the line triumphed over the need for a robust assessment of the business case.

Is Geoff Willis the right person to be heading a taskforce to investigate Tasmania’s energy security, a problem Basslink was designed to fix, when his fingerprints are all over the Basslink business case approval and implementation as CEO and director of Hydro at the time?


The government initially resisted establishing a parliamentary committee to start asking questions, no doubt guided by the political maxim to avoid such inquiries unless you know the result.

The government relented and took the chance to refer matters to the joint house Public Accounts Committee, a six member committee with two Liberals and a compliant chairperson Ivan Dean, a populist grass roots politician whose Hansard record shows a preponderant interest in police procedural matters and a state free of foxes and cigarettes.

Mr Groom has got himself a suitable chairperson, one who inhabits a world where the only thing worse than a fox that smokes is a carbon tax.

The evidence that dam levels have been recklessly managed is not overwhelming. The whirlwind known as Kevin07 precipitated the possibility of a carbon tax. In the seven full years since, from 2008/09 through to 2014/15, dam levels rose.

This is clear from the following chart. 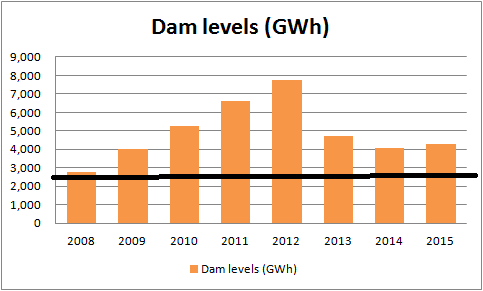 Whilst it’s common to refer to a per cent of full capacity when discussing dam levels, the amount of stored potential electricity in GWh is more meaningful. Also dam inflows being rainfall less evaporation and outflows for generation purposes are best described in GWh terms.

In GWh terms inflows over the seven years from Kevin Rudd’s election to the year after Tony Abbott pulled the plug on the carbon tax averaged 9,370 GWh whereas outflows were 9,100 GWh. Dam levels rose by 1,500 GWh which is roughly two months of Tasmania’s electricity consumption. In June 2015 there was enough water in the dams for 4,300 GW of electricity which equates to almost six months supply (or 30 % to use the per cent measure of dam capacity).

The armchair critics are saying 30% is too low a minimum. If it were 40% then that’s another 1,500 GWh or two months worth of electricity.

Dam levels of 30% were reckless but 40% would have been prudent seems to be the call.  This implies a drought may last six months and Hydro should have been prepared, but no way would it ever last longer than eight months. When viewed in this light the issue becomes not simply a question of whether Hydro’s dam levels were too low, but also whether a prolonged Basslink interruption was ever part of the Basslink business case.

The following chart presents the data. 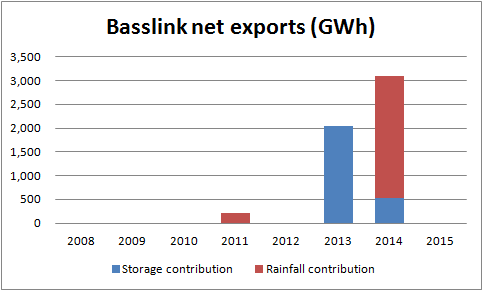 Hydro’s culpable negligence is not obvious especially when in every other year there were net imports of electricity leading to a rise in dam levels. Levels also rose in 2010/11 the year of small net exports. They increased in all but the two carbon tax years. A little more than half the rise can be attributed to less outflows needed for generation because of imports, with the remainder due to rainfall.  The years 2010/11 and 2011/12 were good years for rain. 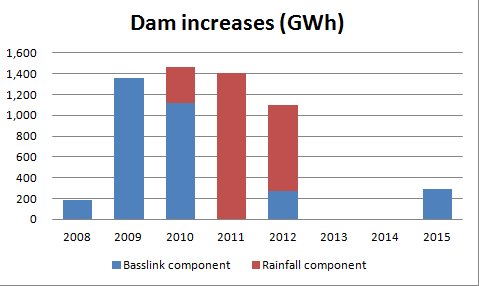 Hydro made some money from energy exports, but more from the sale of Renewable Energy Certificates (RECs). In fact REC revenue represented 70% of Hydro’s underlying profits during the carbon tax years. For a while after Tony Abbott said he wanted to scrap the REC scheme completely, for Hydro to have replenished state coffers by generating as many RECs as it did was seen by most observers as a sound move. Most observers overlook the impact of REC income. It mightn't make much sense at first glance to export power and then import a similar quantity, even if prices were identical, but it overlooks the fact that the extra power generated and exported produces extra revenue, being the REC. It's only a bit of paper but users are required to purchase a mandated number under the REC scheme.

The gas powered Tamar Valley power station has caused nothing but problems and grief. The government was warned at the time that the proposed capital cost was not justifiable due to high production costs. But worried about energy security and the part completed project falling into the hands of a competitor, the government backed Aurora Energy in its acquisition and development of the power station via Aurora Energy Tamar Valley P/L.

By any measure Aurora Energy failed with AETV. In 2012/13 when AETV was transferred to Hydro, the value of the generating assets was written down by two thirds or over $200 million. Also onerous gas supply contracts were recorded in the financial statements, contributing another $100 million to losses. Coincidentally Geoff Willis was a director of Aurora Energy from 2007 and Chairman from 2011 when crucial decisions were made by AETV.

The latest year 2014/15 AETV under Hydro’s ownership generated little or no power. Yet it drained $50 million worth of cash from Hydro’s depleted reserves. Hence whether to sell or retain became an issue.

There is no doubt both the Hydro board and the government needs to explain their various positions on the sale of Tamar Valley power station.

Neither is possible without canvassing the brief unfortunate history of AETV. None is likely by a conflicted taskforce chief or a partisan parliamentary committee.

Hydro have kept a low profile. A recent public explanation by CEO Steve Davy was timid. An innocent on death row with Steve Davy as defence lawyer wouldn’t be a happy camper. Maybe Hydro is waiting for the dust to settle.

Premier Hodgman has shown an appalling lack of leadership. The opportunity beckoned to solve a problem which to outward appearances was created by others. Rather than show a decisive way forward his government has dithered and reverted to mean, preferring a partisan bunfight and a cover up of the underlying causes while the lynch mob takes over.