State Budget: Back to the barn

Put away the Prozac. There are now surpluses as far as the eye can see.


That is the message from this year’s State budget.


The following chart shows the estimated outcome for 2016/17 and the next three years forecasts. 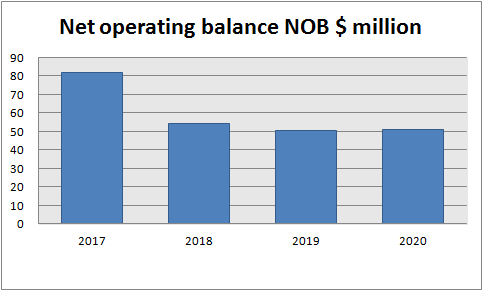 The net operating balance is a profit figure. For 2017 the $730 million received from the Federal Government to fund the Mersey hospital for 10 years is excluded as it was immediately transferred to Tascorp the government’s finance company as an equity contribution, for safe keeping to be paid back as dividends to the Government and spent as required.


However capital grants are included as well as $40 million in each year transferred from TT Line. As capex payments are included, the NOB becomes an unrealistic measure of profitability as the spending of these amounts is excluded. Capital outlays don’t form part of profit or income statements. This NOB measure is the one the Government uses when discussing a budget outcome -- $54 million next year 2017/18 and similar amounts thereafter.


The next chart shows the NOB compared to the cash situation. 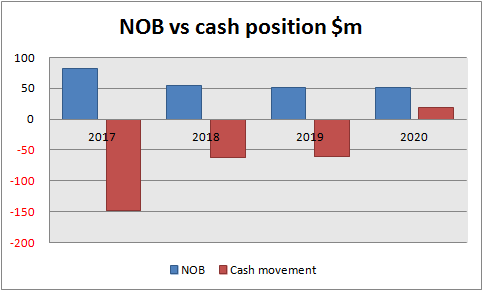 The cash position is taken from the Statement of Cash Flows in the Budget Papers. The cash position is of crucial importance to a service deliverer like the State government. Whilst it is usually a good indicator of what a business may be doing, in this case care needs to be taken because overnight borrowings from Tascorp on 30th June to replace any internal borrowings from special deposits and trust accounts (this has been termed raiding the barn in the past) distorts cash movements as reported.


The next chart shows what happens to NOB when (a) the TTLine transfers are removed and (b) TTLine transfer and capital grants from the Federal government are excluded. 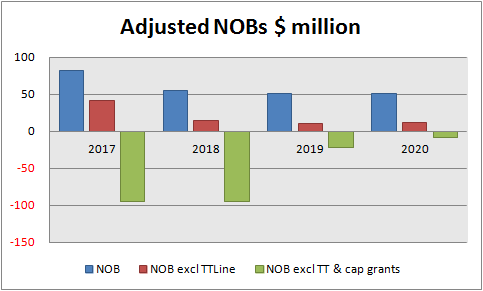 The logic for removing the TTLine dividends is that it is not income. To paraphrase the Treasurer the transfers are not to prop up the budget bottom line but to remove the money from the clutches of a future Labor government. So let’s remove them from the NOB calculation. The rationale for removing capex grants is as stated above – it leads to an unrealistic measure of profitability if they’re included because the spending of the amounts is excluded.


The removal of the TTLine transfers of $40 million per year severely reduces the NOB (red columns). The further exclusion of the capex grants puts the NOB into deficit (green columns).The resultant amounts are the Underlying NOBs. These are included in the Budget Papers (without the TTLine adjustments) but are never highlighted because they always indicate deficits.


Let’s now look at the adjusted NOB (in this case excluding only the TTLine transfers) compared with the true cash position which ignores the overnight borrowings from Tascorp. 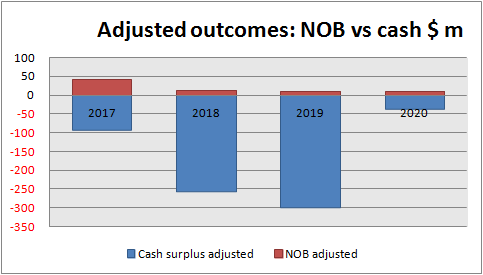 
Where is this money coming from?


The barn is where all the special deposits and trust accounts are stored. At one stage Ms Giddings had borrowed $920 million from the barn. At June 2017 the amount of missing hay will be about $330 million. In three years time it will be over $700 million as the Hodgman government builds Tasmania’s future. 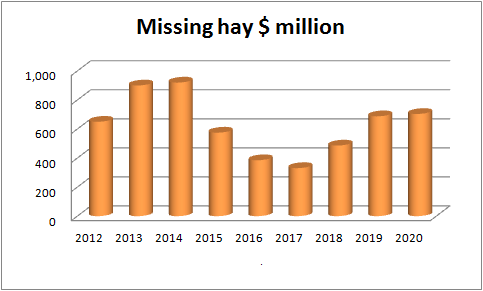 The missing hay in 2020 won’t be quite as much as a few years ago but the stock of hay on hand will be less. 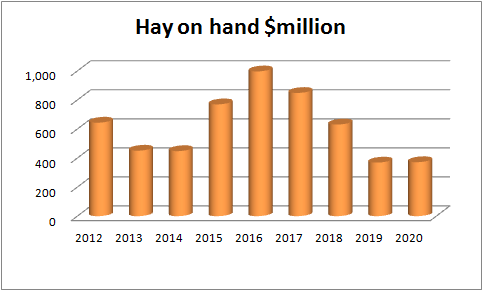 The pile of hay has and will be boosted by TTLine transfers. Given they’re locked away in a side barn unavailable for anything but funding replacement vessels what does the stack of hay look like if they’re removed. 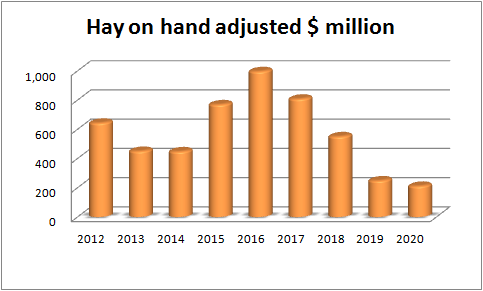 By 2020 only $212 million remains, well below previous lows. At this time there is supposed to be $247 million in the Tasmanian Risk Assessment Fund. The government is a self insurer for most of its workers compensation and general insurance needs. It doesn’t insure privately but rather ‘retains’ funds to cover future liabilities. At 30th June 2020 the actuary has estimated the liability of the Fund to be $247 million. Which means the government will be dipping into funds supposedly set aside for insurance needs to run the business of government. It will have no option. Everything else will have disappeared.

The TTLine transfers have shone a light on the practice of shifting funds between the government and its businesses. Transfers from TTLine are included as income but when transferred back to fund the new boats will be equity contributions into TTLine and hence won't affect NOB. The Mersey money received in 2016/17 is recorded as a grant in 2016/17 and actually increases NOB by $730 million. The government however didn’t crow about this huge surplus figure because everyone knew it came from a windfall. But then what happened is that the funds were transferred to Tascorp as an equity contribution. When the funds are needed, at the rate of approximately $80 million per year, they will be returned to the government as a special dividend. This will enable an income amount to be offset against the spending of $80 million or so every year. If the funds were just left in government coffers, it may have boosted the level of hay in the shed but every time it was spent for its intended purpose a deficit would have resulted with no offsetting credit. The government would have been in deficit for the next 10 years. That would have been a bad look.

It’s difficult to escape the conclusion that the way the TTLine and Mersey fund transfers are handled in the governments books is designed to optimise the NOB figure which is reported as a measure of sustainability.

So many commentators are bedazzled by the surplus figures without bothering to have a closer look at what the figures are saying. Collective amnesia is endemic. The current government lambasted the previous government for cleaning out the barn but here it is doing exactly the same barely a few years later.