The case for Basslink?

(Published in The Mercury on 20th April 2018. This blog includes additional endnotes.)
With all the talk about a second Basslink one would have expected to have a clear picture of the costs and benefits of the first interconnector. Surely if you’re buying another of the same, one of the determining factors would be how the first has performed? Has it worked as planned?


The short answer is no. It’s been a costly voyage into the unknown.


It cost Basslink P/L $874 million to build the cable in 2006. Since then Hydro has paid $1.2 billion in fees and associated charges to use it.

Another $1.6 billion is expected to be paid before the contract expires in 2031 although Hydro does have an option to extend the deal for a further 15 years.


When Basslink P/L was selected as the preferred cable builder and a preliminary agreement signed in February 2000, the cost was estimated to be $500 million and the annual usage fee $40 million.

In addition, there were fees payable to Macquarie Bank for hedging costs.

While the final agreed cost for Basslink was being determined, Hydro could have walked away. But it had decided to proceed come hell or high water even though the final cost was a giant unknown.


Hedging during the pre-construction stage was like credit betting. No money changed hands. By November 2002 when the cable cost and the facility fee were finally agreed, Hydro owed Macquarie Bank $150 million. Thereafter the only ongoing hedge was one to protect against rising interest rates causing rises in the facility fee.[i]


Hydro pays the facility fee to Basslink P/L and the hedging fee to Macquarie.

In general, if one rises the other will fall and vice versa.  That’s the way ongoing hedges work. The combined figure is currently about $120 million per year.[ii]


The Auditor General, following a referral from the Ombudsman wrote a report on Hydro Hedges in 2009. He essentially found the hedging fell into the category of ‘it sounded like a good idea at the time’. He was more critical of Hydro’s lack of disclosure of the mounting losses.

It was not until 2006 that the hedging liability, as well as the facility fee liability appeared in the financial statements. Before then there was only a fleeting mention in the notes to accounts. In some years Hercules Poirot would have missed it.


The Auditor General satisfied himself the end justified the means[iii]. The outcomes projected in the business case were achieved so he said. A better outcome could have been achieved without hedging he conceded.


So did the mounting hedging costs perversely act to keep Hydro at the table, to keep hiding the costs, hoping interest rates would increase to a level that would justify the original hedge bets, rather than walking away when costs kept rising and the project became marginal, with nothing to show but a huge amount payable to Macquarie Bank? And maybe if the preliminary hedging costs were included in the business case it would have become even more problematic?


If a business case is designed to justify a decision already made there’s a greater chance of dodgy assumptions.

Hydro inflows have fallen short of historical averages used in the business case by 10% over the last 15 years. The signs were clear back then that annual inflows were trending downwards.


The Expert Panel which reported to Government in 2012 about the Tasmanian Electricity Supply Industry took a blinkered look at why Basslink was failing to live up to expectations and essentially concluded Hydro was a victim of circumstances, rather than due to any errors of its own.


The Panel said in its final report that Hydro hoped to make profits in the early years by running down water reserves. Yet the Expert Panel knew that there were no such reserves from 2001 onwards and should have categorically said so. Its 2011 discussion paper revealed the state of water storages from 1998 onwards[iv]. The business case could not have assumed a run down in dam storages. If it did it was a sham.


The business case also assumed Tasmania would be a net exporter of electricity, but this could only have come from gas. How it was to be possible to import gas through a pipeline, convert it to electricity and then send it back to Victoria via Basslink and consistently make money is yet to be explained.

Without electricity from gas there would be no net exports. And that is what happened. Tasmania has been a net importer of electricity.

The only significant way of making money from Basslink is for export prices to be much higher than import prices, enough to recoup the daunting annual costs. It happened during the carbon tax years but there were only two of them.[v]


As the Auditor General recommended in 2009 there should be enhanced reporting, biannually to Parliament, whenever major projects such as Basslink, are undertaken.


The possibility of a second Basslink has led to a slew of consultants’ reports, with more to come. Predominantly they don’t make easy reading and are usually skewed to the technical side. Surely there’s a need to put some simple financial facts on the table about the costs and benefits of interconnector cables.


There’s no better place to start than by explaining, not simply justifying, how the current Basslink has worked, before we are faced with another deal largely hidden from view and which if the mistakes of the first are replicated will lead to sub-optimal resource allocation and much more pain for the State.

[i] The initial hedges taken out in March 2000 are quite different from the current ongoing hedge. Initially interest rates and exchange rates were hedged using forward contracts. Agreeing to buy and sell future bond contracts is a way of hedging interest rates. As interest rates fall bond prices rise and vice versa. Foreign exchange can be hedged in a similar way, eg agreeing to buy and sell Euros in the future. Much of the cable materials were denominated in Euros. The hedges which cover interest rates and foreign exchange rates for the construction phase were closed out in 2002. Hydro lost $8 million on the short term interest rate hedge but gained $27 million on the foreign exchange hedge. The 2002 financials revealed a net amount of $19 million was owing to Hydro. But the hedge covering longer term interest rates which feed into the facility fee over the 25-year term of the Basslink contract produced large losses and was rolled into a different hedge arrangement called a facility fee swap. In its simplest form a swap agreement would see Hydro paying Macquarie an amount equivalent to the fee using fixed interest rates and Macquarie would pay Hydro an amount using variable rates, whatever they were at the time. Because variable interest rates have always been below the agreed fixed rate back in 2002 (just under 8%) Hydro has always been out of pocket. In other words, Hydro pays more to Macquarie than Macquarie pays to Hydro. The swap deal in this case is complicated and made even worse by the fact that losses from the extra $150 million owing by Hydro in 2002 became part of the 25-year swap deal which fixed interest rates for 25 years. The amount Macquarie would otherwise pay Hydro is reduced even further by amounts withheld to settle the $150 million debt. The swap deal is just a side arrangement between Macquarie and Hydro to hedge interest rates. Hydro still needs to pay the monthly facility fee to Basslink which factors in variable interest rates and which is indexed each year at just under the CPI rate.

[ii] To get this figure into context, interest on Hydro's $900 million of borrowings in 2017 was $34 million. The figure of around $120 million for Basslink fees and hedging costs is what’s been due in each of the last two years. These amounts are included in Hydro's financial statements. In 2018 $128 million was expected to be paid. A year earlier it was $123 million. The actual amount paid in 2017 is not known as Hydro refuses to divulge how much was withheld in that year as part of its dispute with Basslink P/L.

[iii] The Auditor General put the brightest gloss he could on the $150 million in losses. His criticisms are always subdued, seemingly conscious of not wanting to frighten the horses. Of that figure $55 million were not cash losses he argued, but “an unrealised accounting adjustment……. whether this eventually is a cost or a gain will not be known until the hedge is completed…”  Maybe but a little more explanation would have been helpful. On current indications Hydro will end up paying Macquarie $600 million over the 25-year term of the deal. Approximately $300 million has been paid already. The Auditor General went on to say: ”From an accounting perspective these costs were properly capitalised into the Basslink project. There were not, therefore, losses”. At best this is misleading. The costs weren’t taken into consideration when assessing the viability of the project. They were deemed to be, as the Expert Panel noted, ‘sunk costs’. And when the costs were recorded in Hydro’s financials they didn’t add to Hydro’s assets as these are based on future earnings, not on what the asset may have cost. So, in effect hedge costs would have been written off as they wouldn’t have increased asset values. Therefore, they were in effect recorded as losses.

[iv] The Expert Panel (page 24 Volume 2) said the business case considered revenue from net exports, particularly early in the cable’s operational life “when it was assumed that positive cash flows would be generated from the ‘selling down’ of some of the water reserves that had been required as a buffer for hydrological risk management in the absence of Basslink”. Earlier, in 2011 the Expert Panel released a discussion paper which contained the following figure: 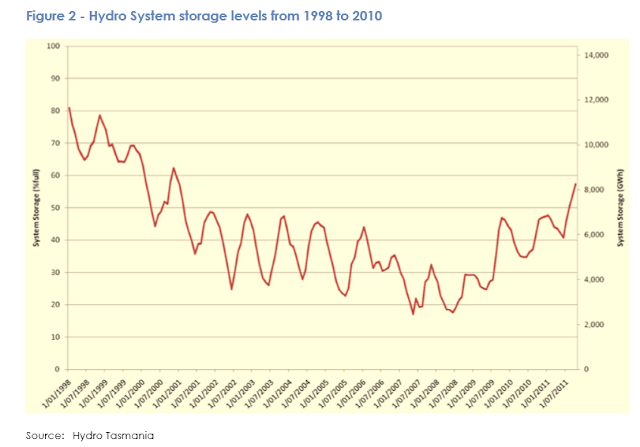 From 2001 onwards, there was no buffer. There were no reserves. Yet Hydro told the Expert Panel (see page 46 Volume 2) that the estimated ”value forgone due to the difference between the opening inventory of water assumed in the business case and that which was observed is in the order of $115 million.” Water levels hardly changed from when the business case was prepared in 2002 to when the cable started operating in 2006.

[v] The Expert Panel (page 25 Volume 2) stated the Basslink business case assumed gas fired generation would be available and result in surplus generation being available for export.  In an answer to a question on notice at the 2017 GBE hearings Minister Barnett said the business case assumed 23,000 GWh of gas generation from 2006 to 2017. That’s 2,000 GWh pa. Less than half eventuated and that was delivered at a loss, by both Hydro and Aurora. To get figures into perspective Tasmanian annual demand is around 11,000 GWh.  The Hydro system is currently rated as capable of averaging 8,700 GWh pa and wind contributes about 1,000 GWh. Gas was used by Hydro in the early years (about 3,000 GWh from 2006 to 2009) when there was a need to build dam storage level, 1,000 GWh during the carbon tax years 2013 and 2014 when net exports totalled 5,000 GWh, and 1,500 GWh during and following the 2015 cable outage. Aurora generated about 5,500 GWh during its ill-fated loss-making stewardship of the Aurora Energy Tamar Valley power station from 2009 to 2012. Overall gas has not underpinned electricity exports. In the 12 years to 2017 net imports of electricity via Basslink have been almost 5,000 GWh.