Not everyone it seems is fully aware of the scale of funds flowing into Federal Hotel’s coffers each year from gambling. It’s all publicly available information, from the Tasmanian Gaming Commission Reports and ASIC returns lodged by Federal Hotels’ parent company Mulawa Holdings Pty Limited.


For the year 2010/11, player losses for table gambling, keno and poker machines (EGMs), the 3 leisure pursuits covered by FH’s monopoly license started to flatten out a wee bit, $256.9 million compared with $253.2 million in the previous year. Pubs and clubs (excluding those owned by FH) ended up with $16.3 million (6%) from commissions net of EGM machine hire and promotion fees, the Government $59.5 million (23%) in taxes and license fees whilst the balance of $181.1 million (70%) landed in FH’s lap.

The above are just the gross income figures. There are of course wages and overhead costs to be paid including in FH’s case, EGM leasing costs and the costs of running the Network gambling business. 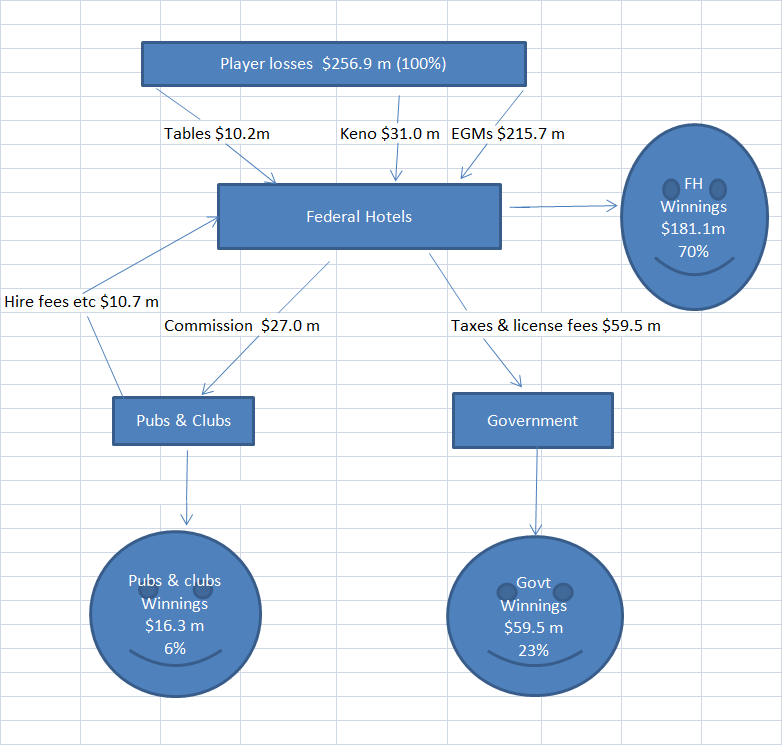 What about FH’s overall profit situation?


• But 2010/11 had a full year for Sapphire (open April 2010) plus additional revenue from 2 gambling dens on the NW Coast, Mackeys Royal Hotel, Latrobe and Furners Hotel, Ulverstone acquired during the year.


• FH now has 330 of the 1279 EGMs in pubs and clubs. The 2 venues added during the year take its total number of pubs with EGMs to 11, all within the top 25 gambling establishment in terms of EGM turnover.


• Disappointing downturn in profits given the problems looming, possible mandatory commitment legislation and bet limits, downturn in the tourism industry and probably most significantly, the rise and rise of internet gambling.


• Operating cash flow was $66 million but after including interest and lease payments on EGMs only $37 million was available to fund capital upgrades and dividends.


• Bank borrowings were up by $19 million to $200 million, coincidentally almost the same as the dividends of $18 million paid to the 6 shareholders, members of the Farrell family.


• The total dividends paid over the last 6 years is now $97 million. Bank borrowings are up by $117 million over the same period.


• FH’s bankers (ANZ) must be starting to show some concern with the level of borrowings, as the value of the business is particularly influenced by the profits from gambling.


• Borrowing to pay dividends is not normally regarded as a prudent move. No doubt FH will construe the borrowing as needed to fund the purchase of the 2 pubs from the Goodstone Group.


• The cash purchase price for the 2 pubs was $33 million, $15 million was for goodwill, $17 million for land and buildings and the balance for stock and plant.


• Pubs with a dominant line of pokies sell for a multiple of 9 or 10 times earnings (at least they did a year ago) so the 2 additional pubs which cost $33 million should add $3 million to the bottom line before tax for a full year.


• As well as bank borrowings FH owes $45 million on its EGMs. These are hired to pubs and clubs and used in its own establishments.


• The amount spent on new plant and equipment during the year fell to $5 million, a noticeable drop from the prior year. The average capex over the last 5 years has been $11 million. Hotels are a capital intensive industry and continual updating of facilities is required to maintain standards. Maybe FH is feeling the cash flow pressure?


• Employment in the group fell from 2,038 to 2,016 over the year, despite the increased number of pubs, a sure sign that things are tougher.


• There would be a huge fire sale if ever FH lost its pokies. Without the pokies the business would struggle to service $30m to $50 m of debt. And dividends would disappear.


• There can be little doubt that pokie revenue has enabled FH to run high profile marketing promotional campaigns that have had spin off benefits for the Tasmanian tourism industry. Apart from the obvious questions about the equity of gambling taxes and the social harm inflicted, has the implicit subsidy which I suspect to be roughly $10 million per annum by virtue of its monopoly licenses, produced an optimal return for the Tasmanian tourism industry, rather than merely feathering the nests of a few interstate shareholders? It would indeed be interesting to compare the levels of assistance including implicit assistance given to say Saffire, Barnbougle and MONA (all added as tourist drawcards at roughly the same time) with the outcomes produced by those businesses?


(The above figures update the 2009/10 figures used in the more substantive article Winners and Losers, posted a year ago).