Two months ago the problems facing the State Government were outlined with a detailed examination of cash inflows and outflows in the General Government Sector over a 9 year period including the then Forward Estimates: State of the State: What your mother didn’t tell you, graph by graph.


This note proposes to update the information as a result of last week’s Budget, to see what effects if any may ensue.

In March we observed the State’s current situation was as follows:


• A reluctance to address the matter of reduced inflows.


• Falling ‘investing’ outflows, to such an extent that expenditure on new capital will barely cover impairment of existing capital by the end of the forward estimates period.


• A small but inexorably growing ‘financing’ cost of unfunded superannuation which will soon equal amounts spent on ‘investing’, on new capital in other words.


• A maintenance of the fiction of ‘net debt free status’ when our financial liabilities are still increasing.


• A growing reliance on cash in advance from Federal specific purpose grants to finance the general operations of Government.


• The borrowing and spending of amounts appropriated to Special Deposit and Trust Funds notably the Superannuation Provision Account, without any reasonable chance of repayment.


• An absence of any realistic measures to assess the long term viability of the State.


The flat lining of future cash inflows was simply addressed by arranging for Treasury’s model of future GST receipts to be used in preference to the figures supplied by the Australian Government and contained in Budget Paper No 3 of the recent Federal Budget. The following graph contains the figures for the current year 2011/12 and the next 4 years from both sources.

In the last 3 years of the forward estimates the extra GST revenue estimated by Treasury’s model is $129 million, $288 million and $316 million respectively. A total of $733 million for 3 years. The Treasury model implies growth of 7% pa, whilst the Feds say less than 3%.


Need a solution to the loss of $1.8 billion from GST and State taxes as a result of the GFC? No problems. I’ve got just the model for you.


Treasury no doubt have good reasons for estimating Tasmania’s per capita share of GST revenue will increase from 158% in 2012/13 to 176% in 2015/16, the after effects of the Wilkie RHH monies were not properly accounted for by the Feds for instance. But is it the best estimate? Or at the upper end of expectations? How has the model performed in the past with making correct predictions? The GFC seemed to have confounded everyone with GST receipts falling much quicker than expected.


The health of the General Government is heavily dependent on the increased receipts. There seems to be no Plan B. Are we putting all our free range eggs into one basket?


The rosy predictions for GST compared with other operating grants and State taxation, the next 2 biggest sources of revenue for the State is shown in the following graph.

The GST is assumed to grow at about 7%.


Together the 3 revenue sources comprise roughly 75% of State revenue.


The budget does imply a leveling of operating outlays. Operating inflows and outflows are shown in the following graph. A growing gap between the 2 lines is essential if we are to survive.


The Government in recent years has plundered amounts appropriated into Special Deposits and Trust Fund SDTF accounts, including but not confined to the Superannuation Provision Account. The Temporary Debt Repayment Account TDRA has recorded all internal borrowings. At 30th June 2012 the TDRA will have a balance of approximately $2,180 million, $1,550 missing from the SPA account and $630 million from other SDTFs.


The Government plans to ‘forgive’ all the internal borrowings from the SPA account. This will reduce the TDRA to $630 million.


It will then arrange a 24 hour overdraft from Tascorp for $630 million to repay the TDRA balance, and then close both SPA and TDRA.


Whew. That got rid of those 2 problem accounts. Too easy!!


Although the proceeds from the 24 hour overdraft of $862 million will be deposited into the bank taking the General Government’s bank balance to $915 million, at this point the State will be in net debt, of $134 million.


Net Debt is quite a misleading concept; largely symbolic and narrowly defined ... $134 million of net debt pales into insignificance alongside $5 billion of unfunded superannuation liabilities.


The process will be repeated for the next 3 years. Come 30th June the Government will use any surplus cash plus a 24 hour overdraft to replenish missing SDTF monies. By the end of the Forward Estimates in 2015/16 there will no longer be a need for a 24 hour overdraft because there will be enough surplus cash, boosted by the increased GST receipts to reimburse all missing SDTF amount.


If this occurs it will be a truly wonderful achievement, a masterful example of cash flow management. Generating $862 million surplus cash in 3 years seemed a pipedream 6 months ago.


However it is totally dependent on the rosy GST projections.


In theory at least, benefit payments to retired members of the now closed defined benefit superannuation schemes were paid from the SPA account, but because all the cash was missing, in practice the benefits were paid from operating cash flow.


With the SPA account being assigned to the trash can, future benefit payment will continue to be paid from operating cash, but for all intents and purposes these outflows are ‘financing’ outflows because they relate to a reduction of a liability incurred some years ago.


The following graph shows the superannuation benefit payments gradually rising from $198 million today to $252 million in 2015/16. The borrowings being repaid reflect the reduced reliance on the 24 hour overdraft. Added together they give total financing outlays.


The following graph indicates how many of our funds (excluding Nation Building Grants) we will be spending on new capital and infrastructure. Compared to depreciation, or the rate at which old capital is deteriorating, it is a little disappointing.


The spike in 2012/13 was similar to that budgeted for 2011/12 in last year’s Budget, but the reality fell $130 million short. When cash flow gets tight Plan B is always to defer capital expenditures. 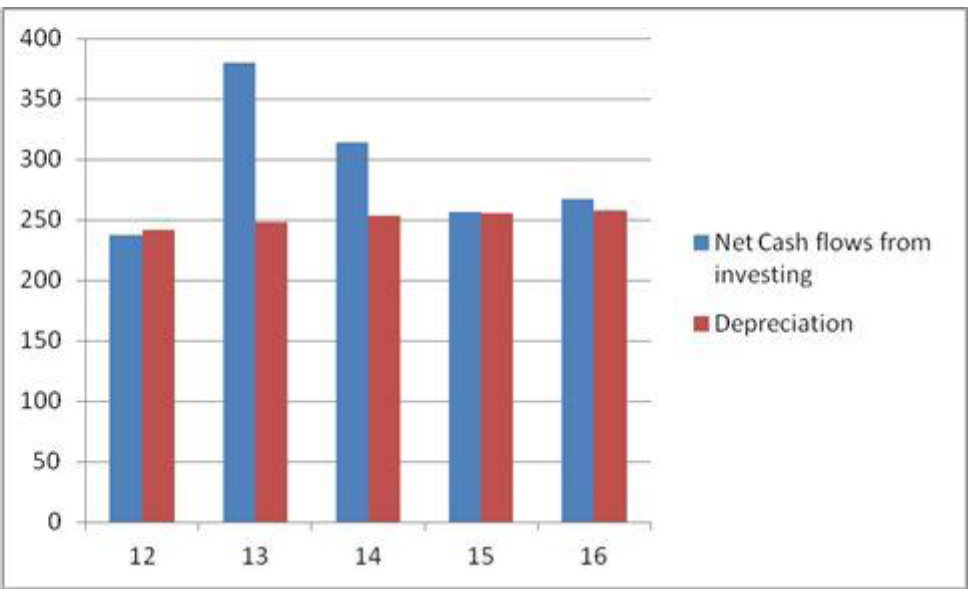 Spending a net $268 million on investing or capital in 2015/16 is only 1% of Gross State Product GSP. Victoria has a target to spend 1.3%. This would translate into about 7% of operating inflows in Tasmania.
A measure of sustainability


For a small service entity like Tasmania, virtually all outlays need to be funded from operating outlays. We may receive capital grants from the Australian Government but these should be icing on the cake and not considered when organising a sustainable structure for Government.


The graph below shows the % of operating, investing and financing outflows each as a % of operating inflows. In 2015/16 the respective %s are 87%, 5% and 10%. The latter figure comprises 4.5% for paying the super liability and the balance for repaying the last of the 24 hour overdraft.


In subsequent years if we could allocate say 85% for operating, 7% for investing or capital, 5% for financing or reducing our liabilities, we might have 3% or $180 million, left over for a rainy day.


That would be a sustainable fiscal strategy. 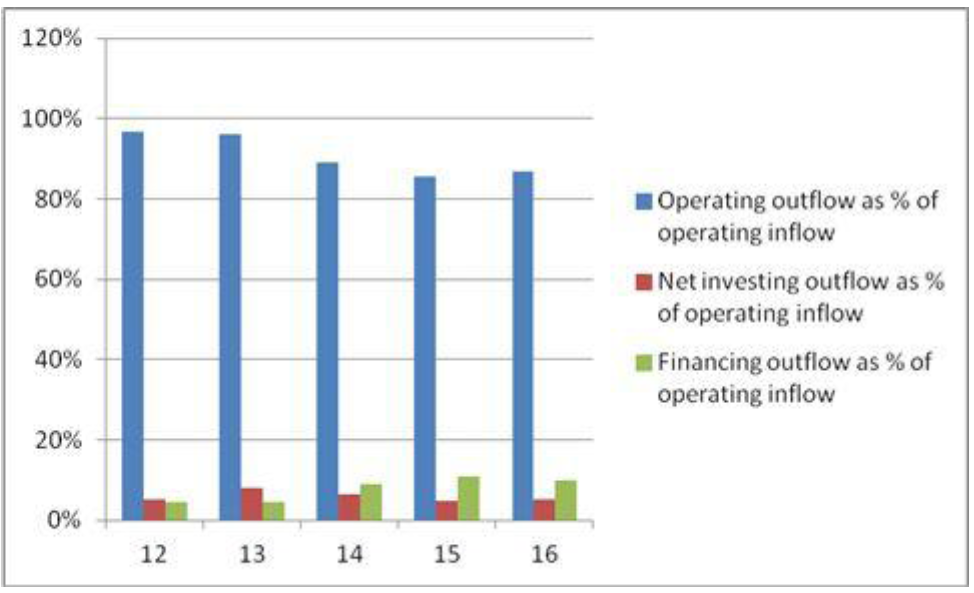 But to achieve those %s it’s so dependent on controlling costs and receiving the expected windfall from GST.


To put all the %s in one column it can be seen that over the 5 year period we exceed 100% each year. Spending more than we receive in other words. 2012/13 is when we venture into Net Debt. But to be fair it does include repayment of $862 million of borrowings (in ‘financing’) over the last 3 years. 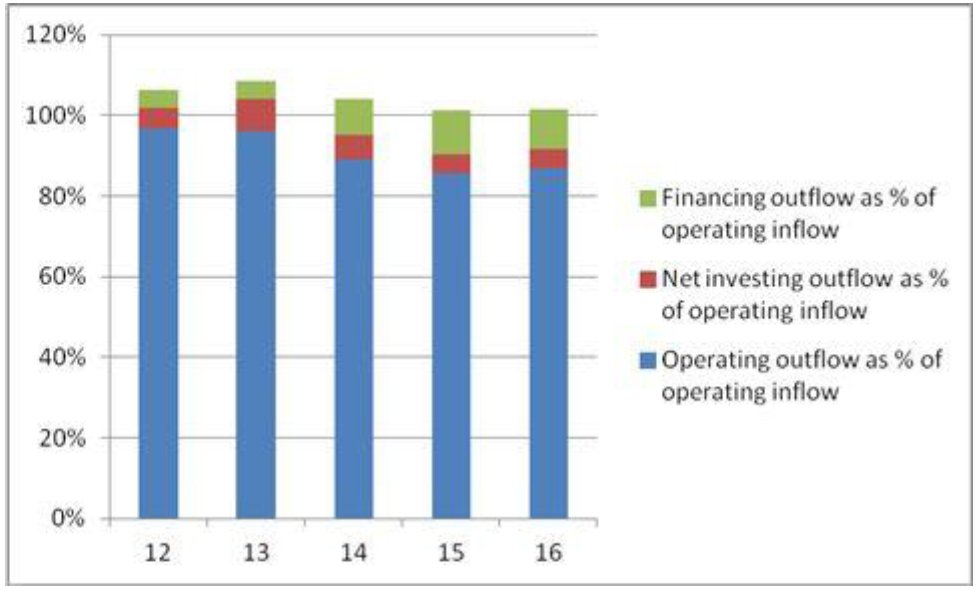 But it’s an extremely precarious situation. Little upside, all downside by the look of it.
Specific purpose grants as a cash buffer


Ignoring the 24 hour increase in cash at 30th June each year, the cash at bank is all unspent Australian specific purpose grants.


At 30th June 2013 again ignoring the 24 hour cash boost the cash in the bank is only $53 million. Wages are about $80 million per fortnight!!
The Government’s measure of sustainability


The Government has decided to reduce the number of measures of sustainability when it publicly comments on the matter.


Net operating balance is the chosen measure. It’s essentially a measure of operating profit that would appear in a P&L statement, but it includes capital grants as income so it’s misleading.


Further flaws were in evidence with this year’s Budget.


In the dead of the night, after last year’s Budget, but before 30th June 2011, without any public fanfare, the Government wrote down the book value of some of its assets, mainly roads, by $859 million. If one reduces the book value of an asset, depreciation in future years will, in all likelihood, decrease, which will…. lo and behold…. increase net operating balance and hence boost the claims to sustainability.


But the Mid Year Report in February 2012 actually increased the depreciation in each year of the Budget and forward estimates.


But the latest Budget delivered the goods, reducing depreciation and hence boosting net operating balance by over $100 million in total for this year, next year’s budget and the 3 years of forward estimates.


With a stroke of the pen we are suddenly $100 million closer to sustainability.


Net operating balance is a flawed measure.
The positives


If we receive the GST as the Government expects, contain costs, and repay all amounts owing to SDTFs we will have achieved a basis for sustainability by 2015/16.
The negatives


Without the increased GST, projected net debt will continue beyond 2015/16 unless a further round of austerity measures occurs. But given the election cycle that is unlikely to happen until the 2014/15 Budget


It seems the Government has set its plan which will last for a couple of years; we will assume a form of suspended animation treading water hoping for the truckload of GST receipts. The Government has baulked at further rationalisation, preferring instead to resort to rosary beads and prayer mats.


The fall back position is not at all clear.


I fear it doesn’t exist.


We are on a knife edge.


The Editor was hoping for a follow up article titled ‘Will Rides to the Rescue’ commenting on the Liberals’ alternative Budget.


A quick look at the plan found this:


“Over 5 year rolling periods, the general Government net operating balance will be in surplus and equal to the medium term sustainable level of net infrastructure investment;


Over 5 year rolling periods, the net infrastructure investment will be at least equal to 0.5% of the historical 5 year average of Gross State Product.”


Whoops…..0.5% of GSP is only $120 million. A net operating balance of $120 million might cover net infrastructure spending of $120 million, but that’s less than half of what we need just to tread water.