Bashing politicians and public servants is like shooting goldfish in a bowl. Whatever else it diverts attention away from any useful analysis of where we are and what are our future options.
Barry Prismall in The Examiner was at it again the other day
highlighting the costs to operate the legislative arm of Government plus the employee costs of all public servants. No attempt at analysis or trying to place things in context. Little more than incitement, an appeal to readers’ prejudices.  A few responded, reaffirming Pavlovian responses are alive and well.
Whilst most of the figures were correct they were select and lacked context.

The article can be found


Barry then concluded with some ridiculous assertions.


” Next financial year agencies and the government will have to find almost $500 million to pay out retiring public servants”, Barry said.


Barry obviously didn’t make it as far as Chapter 6 of the first of three volumes of the budget papers else he would have come across the following table.

$236.1 million is not “almost $500 million” even if one were to take into account The Examiner's usual margin of error. The figures are not Treasury’s figures nor did Ms Giddings flip a coin. They are from the State Actuary. By 2016 the estimated “hit” to Government to use Barry’s pejorative term won’t be $570 million, but $264.6 million.


Barry went on to say the above amounts will have to be paid “because the government fritted away $1.5billion saved over the years to off-set the liability”.


There weren't any "savings". Never ever. It was a Clayton’s account. It was an appropriation, not a cash savings. Money needed to be appropriated into the SPA a/c so that payments to RBF could be made. Money needs to be appropriated before it can be spent. But that doesn't mean cash was sitting aside in a dedicated a/c. When the Government comes to spent money it grabs it from anywhere it is able as long as it's been appropriated, always has done and probably always will, although the Government invariably needs to get Parliament's approval for additional funding each year even after it's been spent.


Prior to 2002/03 the Government’s financial statements were unlike any other. Accrual accounting statements prepared according to accounting standards, with P&L statements, balance sheets and cash flow statements didn’t appear until 10 years ago.


When the Government needed funds to repay borrowings or to spend on some other purpose (usually but not exclusively the former) it used to internally borrow from accounts with surpluses, which it would repay on 30th June via an overnight temporary borrowing.


The Government reverted to this system of temporary overnight borrowings as from 30th June 2012.


During the intervening period 2002/03 to 2011/12 the Government’s internal borrowings were recorded in the Temporary Debt Repayment a/c (TDR). At no stage except for a very brief period in 2008 and 2009 when the Government was flush with funds from the Hobart Airport sale did the SPA a/c, the funds nominally set aside to cover future unfunded superannuation liabilities, exceed the internal borrowings as recorded in the TDR a/c. 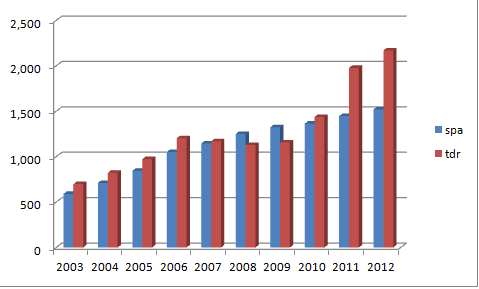 Barry, the cash supposedly set aside was never ever there. Understanding the past just might assist to plan the future.


The above chart does highlight however how the TDR a/c rose in the last 2 years, indicating internal borrowings from other accounts. The profligacy of the Bartlett era post the March 2010 election where other accounts were raided is one of the Government’s current problems. Deferring capex  as the Government has been doing won’t prevent all the cash disappearing pretty soon.


Barry mentions the unfunded superannuation “massive liability” continuing to increase. A bit of analysis may have assisted your readers, Barry. The major reason for the huge increases of late has been the discount factors, the interest rates, have fallen.


The following chart shows how a 1% change in discount factors, both up and down radically alters the estimated present value of the future liability. Simple as that Barry, no need to alarm your readers. 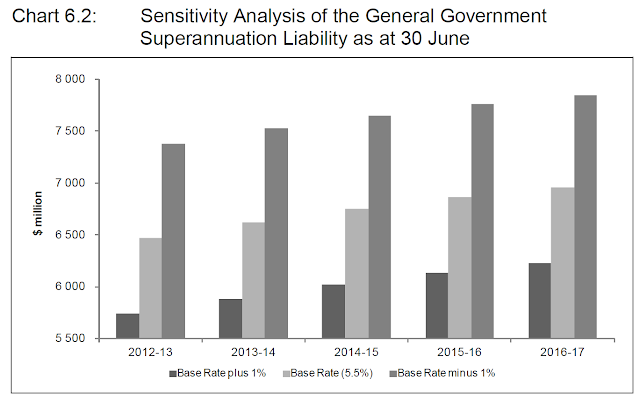 The estimated nominal amounts due each year haven’t changed. The Government’s share listed in the first chart above is currently only about 5% of its total cash outlays. Even when it peaks in say 10 years time the % may only be 7%, although it may be 8% or so if the Government has to tip in a higher % than its current share of 75% of pension and lump sum payments. The balance of 25% is met from plan assets derived from employee contributions and earnings.


The following chart shows the estimated gross liability, the value of plan assets and the Governments net unfunded liability.

The disconcerting feature of the chart is how the value of the plan assets shows little change over the period, meaning employee contributions and earnings are all being used to pay the funded share of 25% towards pensions and lump sums. The plan assets have been affected with GFC fallout notably from ill judged forays by RBF into airports and retirement villages at the top of the cycle and exacerbated by diminishing employee contributions as members retire faster than older members expire and drop off the payroll.


Yet the unfunded share already in excess of 75% keeps rising. Intuition suggests (warning: intuition can be dangerous with actuarial matters) that the Government share will have to rise above 75% as it is responsible for any shortfall. In the mid seventies of last century the Government’s share was as high as 85%.


But at worse the Government will only be devoting 7% to 8% of total cash outlays towards meeting the unfunded liability.


No need to alarm your readers, Barry.
A more responsible discussion of our problems would be preferable to alarmist and poorly researched assertions that had they been written by a cadet journo would surely have resulted in alternative career counseling.