The previous blog had a closer look at Tas Water’s cash flow statements to show how Tas Water is managing to fund its capital programs with a mixture of operating cash and borrowings and how the distributions to owner councils each year require even more borrowings.


So what is the situation with councils?

The Auditor General reports to Parliament each year on councils (LGAs or local government authorities). Aggregate or consolidated accounts are included. LGAs are essentially not-for-profit service deliverers, mainly cash flow operations, similar to Tas Water where cash flow statements give a much better overall picture than income statements. The following is the aggregated cash flow statement for the 29 LGAs for 2015/16: 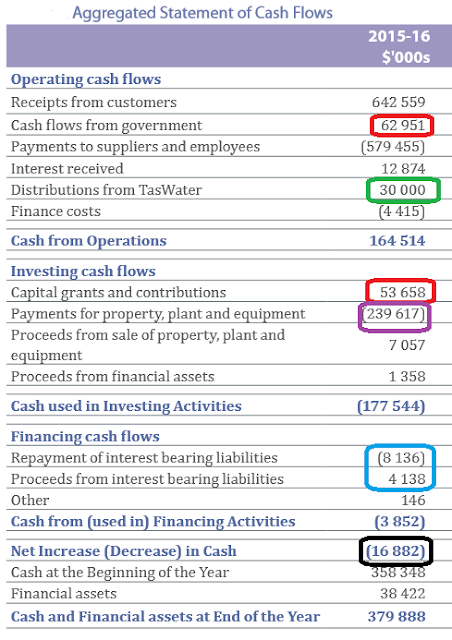 
·       Overall cash declined by $16 million (circled in black). This is not significant because there was a large increase in the previous year when some Federal grants were paid in advance.


·       LGAs’ shortfalls were overcome with grants from the other two tiers of government (circled in red) and distributions from Tas Water (circled in green) which essentially were sourced from grants or borrowings.


·       Seen in this light LGAs are the ultimate basket case at the sump end of our vertically imbalanced system of federation.


There’s little to be gleaned from comparing income statements but a look at balance sheets, showing assets and liabilities at the year’s end is a useful exercise.


First the financial position for the combined LGAs at 30th June 2016: 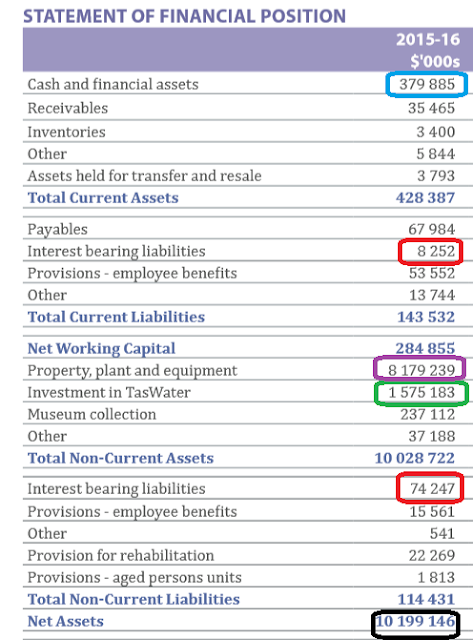 
·       Total net assets (circled in black) were $10 billion. ( Incidentally this is $3 billion more than the Tasmanian government’s latest balance sheet, where net assets were only $7 billion including government businesses worth a net $4.4 billion). 
The differences are glaring.


And yet Tas Water has to borrow to fund LGAs, which are guilty of using Tas Water in exactly the same way, as a working capital cash cow, as governments over the years have misused Hydro and Tas Networks.


The flow of funds between the levels of government and Tas Water is pictured in the following chart: 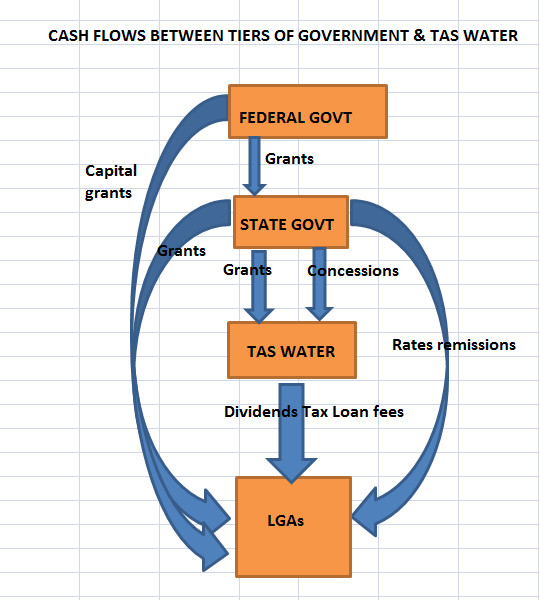 ·       Grants from the Australian government (Financial Assistance Grants) flow through State coffers to LGAs according to State Grants Commission formulae and consist of two components – general purpose and local road components. Both components are untied, allowing LGAs to spend the grants according to local priorities. These grants are generally paid in quarterly instalments so that, in a normal financial year, four quarterly instalments of about $18 million each for a total of about $72 million pa might be expected.


·       Funds from the State government to cover the cost of concessions provided by Tas Water are about $8 million per year.


·       Funds from the State government to cover the cost of rates remissions provided by LGAs are about $17 million per year.


·       The annual cost of funding concessions for rates, water and sewerage is therefore about $25 million.


·       Payments from Tas Water to its owners, the LGAs have been running at about $30 million annually.


Viewed as one consolidated entity LGAs/Tas Water receives over $100 million pa from the Australian government and a further $40 million from the State. (These amounts vary because of varying capital grants). Additional funds have been provided by Tas Water’s extra borrowings ($64 million in 2015/16). Grants and loans comprise over half of the funds needed for capital spending for Tas Water and LGAs.


Little wonder Tas Water didn’t get any offers from Canberra to contribute to its begging bowl. Blind Freddie can see it’s time LGAs had a closer look at the way they cash flow their operations. Sitting on $380 million of cash and only $82 million of debt whilst loading up a subsidiary company with five times as much debt before sending it to try to pull off an Oliver Twist with the other tiers of government is a bit much. Each LGA probably has what it regards as a sensible cash buffer but multiplied 29 times means there’s a lot of cash relative to aggregate annual cash flow demands. The cash pile is twice the annual operating cash flows. Something had to give.


One thing LGAs do better than the State government is to raise more of its own revenue with 60% coming from rates. The $457 million in rates revenue across the 29 LGAs in 2015/16 compares with a pathetic $96 million raised by the State government via land tax. In other words LGAs raised almost five times as much from the same tax base. 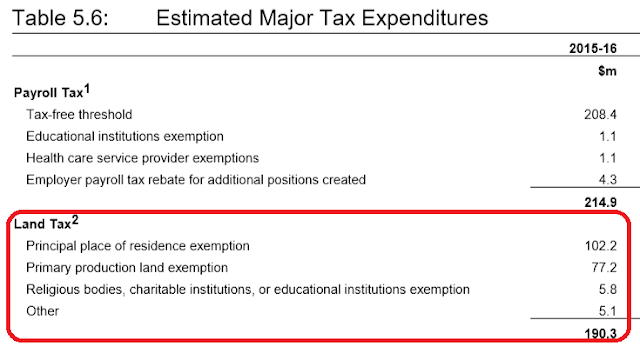 What this table shows is that had the same rate of tax applied to all landowners as was applied to the selected few in 2016/17 pursuant to the current land tax regime, an extra $190 million would have been raised. In other words, $96 million was raised and $190 million forgone. Two thirds was forgone. The point here is not that another $190 million should be raised but rather the burden should at least be shared more equitably.


LGAs have a longstanding objection to integrating land tax collections with rates collections. And they’re never overjoyed about collecting, say the fire service levy which is passed on to provide most of the funding for the State Fire Commission. In their 2011 submission to the State Taxation Review they described rates and land tax as fundamentally different, and expressed the view they didn’t want anything to do with collecting land tax. It was all a bit precious. If more revenue is needed then a higher level of government should give it to them. Exactly the same issue as is confronting Tas Water. Charge for services but if there’s not enough revenue to funds capital spending then someone else should come to the party.


There’s a similar thread running through consumers’ attitudes. Landowners are all too willing to capitalise the increased values of their properties resulting in gains that are largely tax free but are less willing to contribute even a fraction of the gain into public coffers. The idea of clawing some back via an increased rate or land tax component which levies a small charge against increased property values flowing from infrastructure improvements including Tas Water upgrades readily meets spirited opposition. The self interested property lobby wish to remove as many charges from property as possible, and use rates reductions that may accrue from LGA consolidations to further increase the capital value of their properties rather than use a more sensible tweaking of rates and taxes to service the extra debt that will be needed to attend to all the capital spending that everyone wants but few are prepared to pay for.


It’s not Tas Water’s fault that it faces a funding problem. But the solution lies in using the tax base available for both land tax and rates in a more effective and equitable manner. The solution requires a decision by the state and the cooperation and support of LGAs.


Which level of government owns what is not the issue. It seems public opinion favours LGAs and Tas Water to be run as break even service delivery operations where rates fees and charges are set to provide services including normal upgrades as required. This would leave larger amounts of capital spending including Tas Water’s, to be funded by debt and serviced by land taxes, whether collected by the state or LGAs, which will capture some of the value added by infrastructure which otherwise all accrues to those fortunate enough own adjoining properties.


The second and third tiers of government here in Tasmania can scarcely fund anything but minor new assets and infrastructure upgrades by themselves and most people think it quite normal and acceptable. The latest Tas Water stoush needs to be seen in this context. The current system is an embarrassment and needs upgrading.