This is the third in a series of blogs on Tas Water.


The Tas Water saga is yet another example of our inability to solve simple problems. It has quickly degenerated into a political imbroglio where the issues that lay at the heart of the problem are quickly forgotten. This blog will attempt to redress the imbalance.

“A large proportion of our inherited infrastructure is ageing and/or in poor condition”, from page 31 of the latest corporate plan issued in June 2016, is a succinct summary of the state of Tas Water’s assets.


The issue then becomes one of how to fund the necessary upgrades in a timely manner ? The corporate plan says on page 25: “External funding for major projects such as the Launceston Sewerage Improvement Scheme (LSIP), upgrades to the Launceston combined stormwater and sewerage system, rationalisation of greater Hobart’s STPs and rationalisation of the north west STPs will be essential. Long term financial projections undertaken during the past 12 months indicate that without external funding to support the implementation of these major initiatives, they will not proceed over the next 10 years.” (Note: STP means sewerage treatment plant).


The third aspect is the returns that Councils as shareholders expect each year to supplement their rates and other revenue.


The issues are therefore should Tas Water borrow to fund upgrades and the answer is an unequivocal yes and should it borrow more to pay dividends to councils?


The Macquarie Bank model of infrastructure trusts features high debt to equity ratios where much of the spare cash gets paid to financiers and promoters. It works particularly well in situations where revenue streams are regulated. If revenues increase each year with inflation say, resulting in improved asset value then extra can be borrowed to pay returns to equity owners. Infrastructure assets keep on giving, so we were led to believe, a little like Norman Lindsay’s Magic Pudding. Councils view Tas Water as a bit of a magic pudding and are trying to fight off the pudding thieves, Gutwein and Hodgman.


It’s instructive to have a closer look at the Tas Water pudding. The cash flow statement is the place to start. There’s much more to be gleaned from the cash flow statement than from the profit and loss statement. From a financial management aspect, it’s a pretty simple operation . Operations produce surplus cash. However there’s not enough to fund all the capital upgrades so additional has to be borrowed. Borrowings increase further to pay dividends.


Let’s have a look at the last 3 years. We’ll consider one year at a time . Too many numbers all at once may be an overreach.


First a primer on cash flow statements. Cash flow statements present the cash inflows and outflows of a business, not only revenue and costs but capital purchases, movement in borrowings, payments to and from shareholders etc.  The debtors (receivables) of businesses like Tas Water are reasonably steady. As are the creditors (payables). Nor does it have have inventory like a retailer. Hence the cash in and out each year gives a good snapshot of Tas Water.


1.   Operating cash flows—basically revenue and operating costs. It includes income tax, in this case income tax equivalents paid to owners pursuant to national competition rules that apply to government businesses, and also loan guarantee fees paid to owners for the same reason due to the borrowing advantage that government businesses have compared to the private sector.


2.   Investing cash flows--- basically the amounts spent on capital upgrades and new plant less any proceeds from the sale of old plant. It includes a component for interest and employee wages where they relate to capital spending.


3.   Financing cash flows include new loans and repayment of maturing loans, and dividends to shareholders.


The same colour code has been used for each of the three years:


·       The total flows, either inflows or outflows, for each of operating, investing and financing are circled in red.


·       Amounts paid to owner councils are circled in green. 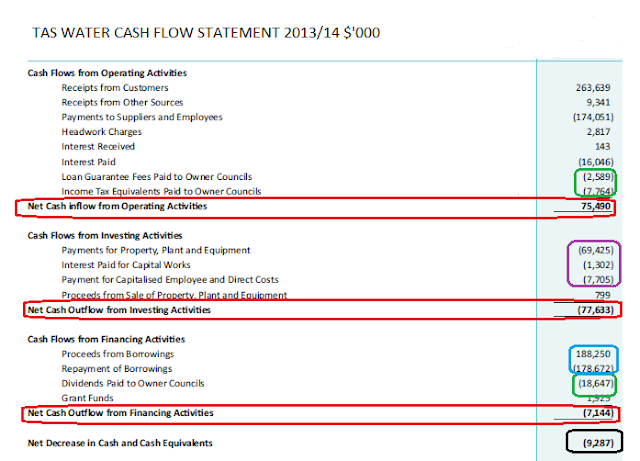 
·       Investing outlays which is the amount spent on new plant was $77 million. In other words there was almost enough cash from operating to fund the upgrades and new stuff etc.


·       Net financing outflows were $7 million made up principally of increased borrowings (cash in) of $10 million and $18 million of dividends (cash out).


·       In other words the dividends of $18 million were basically achieved with $10 million of extra borrowings and a run down in cash of $9 million. 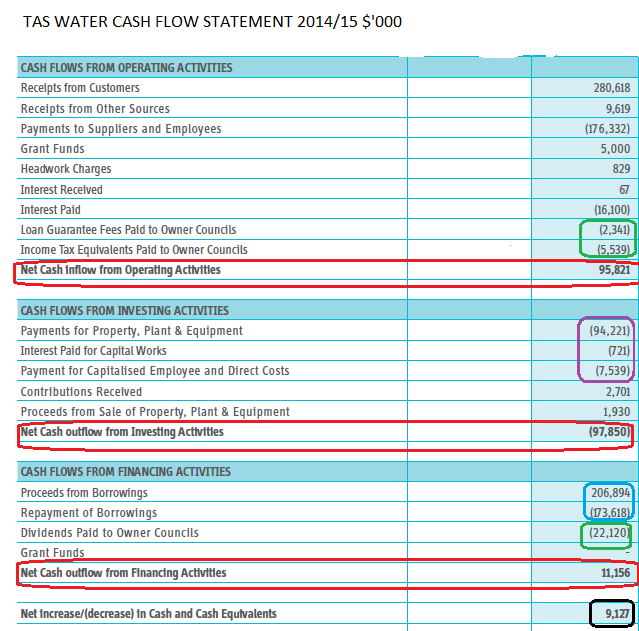 ·       Net operating cash inflow was $95 million including payments to owners of $9 million.


·       Net investing cash outflow was $97 million.  Again there was almost enough cash from operating to fund this amount.


·       In summary extra was borrowed to pay this year’s dividend and to correct the run down in cash due to insufficient new borrowings to funds last year’s dividend. 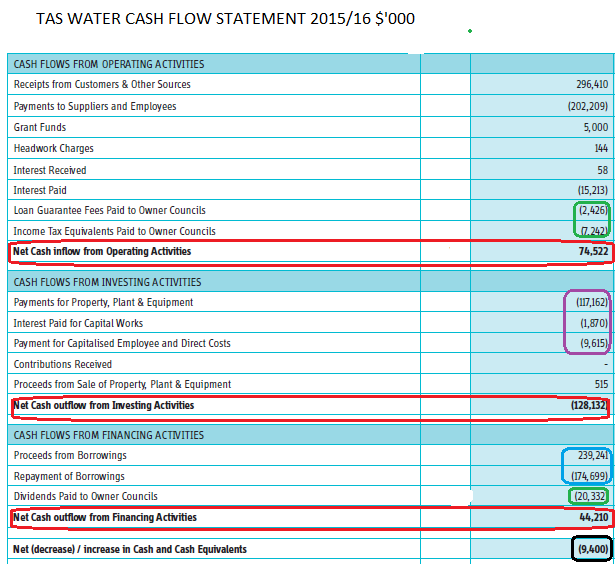 
·       Net investing cash outflow was $128 million. This means that extra borrowings of $54 million were needed over and above cash from operations.


·       In summary even though an extra $64 million was borrowed cash still went backwards by $9 million due to the extra capital spending, the reduced operating cash and the continuation of dividends to owners.


The changes in 2015/16 are readily apparent to a reader, and look slightly alarming, but they shouldn’t have come as a huge surprise to Mr Gutwein because the 2015/16 actuals are not all that different to the cash flow budget contained in the corporate plan dated June 2015, reproduced below. 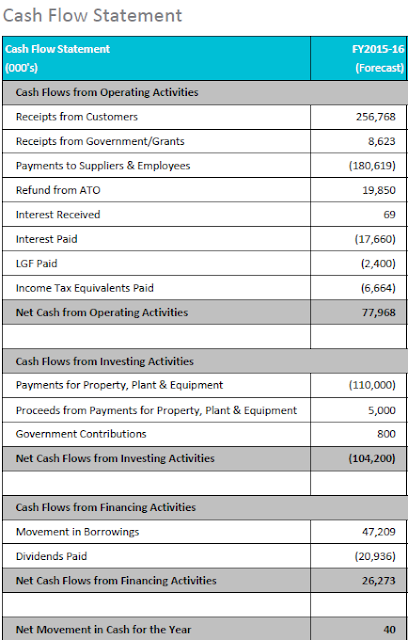 The operating cash inflow was only down $2 million on budget. The extra borrowing of $18 million was needed to fund the extra spent on new plant.


The budgeted cash flow statement for the current year 2016/17 contained in the corporate plan dated June 2016 is as follows: 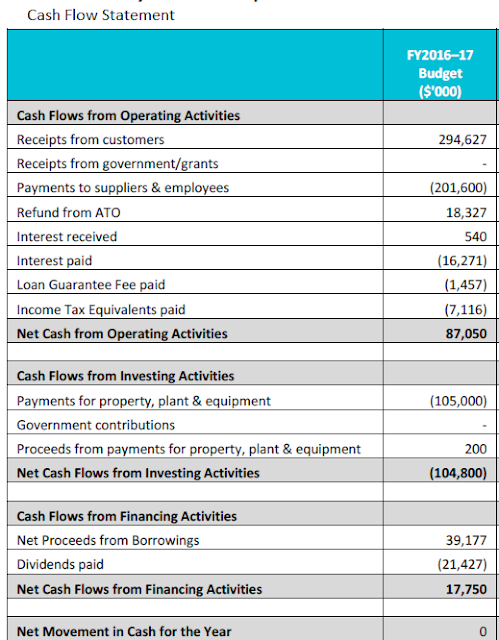 It is similar to previous years. Borrowings are needed to top up operating cash to fund capital outlays and to continue rewarding shareholders with dividends. If the same pattern as previous years is followed, more borrowing might be needed to restore working cash balances following the $9 million rundown in 2015/16.


There is no overwhelming evidence the Board of Tas Water have been particularly remiss. The actuals each year don’t vary significantly from budgets. Mr Gutwein really can’t argue to have been ambushed or even surprised by the outcomes each year.


The Board have made it plain they will struggle to finance major works in the next 10 years.


What is glaringly obvious from the above closer examination of Tas Water’s cash flow statements is not so much the difficulty in organising and funding a plan to fix Tas Water, but catering for the complementary demands of shareholders that necessitates even greater borrowings. Servicing the extra debt whilst keeping prices at reasonable levels will require a financial Harry Houdini.


This is the essence of the Tas Water imbroglio. However, almost all commentary focuses on the political issues, who said and didn’t say what when and all the usual shallow analysis rather than on the simple question of how to fund Tas Water and should Tas Water continue to borrow to help underwrite councils in the full knowledge that under current arrangements increased borrowings can only be serviced and repaid with water and sewerage charges increasing faster than almost everyone will consider desirable.


This is a golden opportunity to put the whole matter of local government reform on the table, what mix of debt funding and operating surpluses and how to best harness the tax bases available currently used by Tas Water (fees and charges), councils (rates) and the State government (land tax and stamp duty).  This matter will be tackled in the next blog.