Local parliamentarian Adam Brooks left no room for doubt. He confided to The Advocate that Rebecca White’s ”latte-sipping, lefty agenda ... will shut down jobs and will shut down the hospitality industry in the North-West Coast.”

How many jobs are there in pokie pubs? Let’s have a look at what an industry participant submitted to the recent parliamentary inquiry. 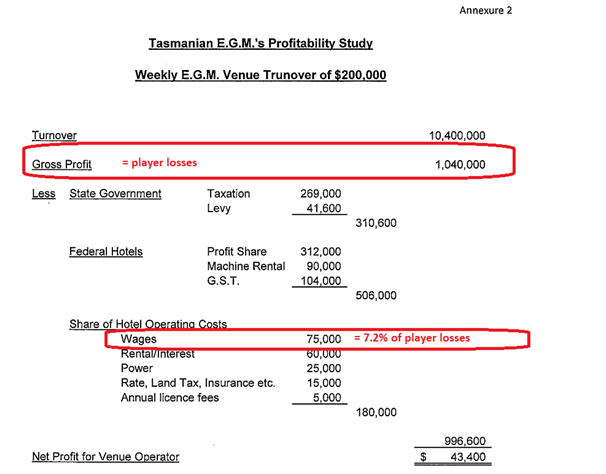 The above sets out the financial aspects of EGM operations at an average Tasmanian pub with pokies. The annual gross profit or player losses are $1.04 million. It is likely to be a venue with 20 pokies altho’ that’s not explicitly stated. The average player losses per EGM is therefore $52k just slightly more than the statewide average for 2016/17 of $46k.


The wages component of the EGM operations are $75k .....which represents 7.2% of player losses. The above case study was presented to the inquiry trying to establish the low level of returns to venues. Hence it is unlikely the wages figure is understated.


There it is, straight from the horse’s mouth. EGM wages are only 7.2% of player losses.


But even if wages are low relative to player losses, perhaps the remaining player losses benefit towns in other ways. If only they remained...?  Unfortunately most of player losses are creamed off by Federal Group’s Network Gaming and leave town, as this chart shows. 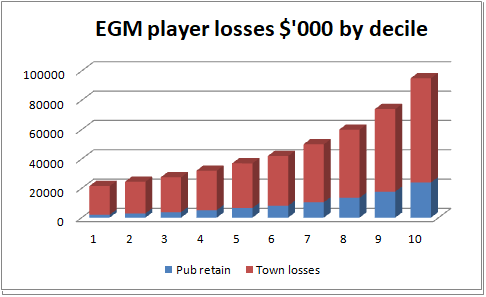 
The following table has the relevant figures for regional areas, all those area outside the urban areas of Launceston and Hobart. (NB a more detailed break up for regional towns is shown in the Appendix at the end of the blog).


Total player losses are $54.8 million. Half the Statewide losses in pubs and clubs accrue in regional areas. But $44.4 million leaves town courtesy of Network Gaming. Of the remaining $10.5 million, $3.9 million is paid in wages for 98.7 FTE employees. That’s 7.2% of player losses.


Whatever job losses may initially occur in EGM pubs if Labor implements its policy, they will be more than offset by job gains in other sections of hospitality, even in casinos and keno as some spending migrates, not to mention other areas of local economies that will attract more spending. One thing is glaringly obvious. By stopping the massive drain to Network Gaming how can regional areas not be better off if pokies disappear from the streets?

Note to the above table.


·       The table is based on data from Tasmanian Liquor and Gaming Commission where player losses are provided for local government areas. Where LGAs include more than one town or where LGA data is aggregated for LGAs with two venues or less, a model was used to estimate player losses.