Sportsbet is currently taking bets on seventeen ‘races’. How many seats each of the three major parties will win in each of the five seats accounts for fifteen ‘races’. Then there’s the two big ‘races’… who will be next Premier, and will it be a hung Parliament or not?


Take the market covering a hung parliament. It’s a two-horse race. Hung or not hung. The odds of hung are $1.65 and not hung $2.10. Unless one is a horse player, most people have trouble interpreting exactly what the odds mean. A bookie always includes his percentage in any quoted odds so that has to be eliminated in order to work out the chances of a particular event occurring as perceived by the markets. In this case, after the necessary adjustments, it means hung has a 56% chance of occurring whilst not hung has a 44% chance.


In the case of not hung either the Libs or Labor will have a majority.


Now in order to win a majority a party needs 13 seats which almost certainly means three seats in at least three electorates. The battle for the fifth seat in each electorate is crucial as everyone knows.


It’s often said if a party wants to achieve a majority then three seats in Lyons is almost mandatory.


What are the Sportbet markets saying? The following are the odds for each party winning zero, one, two, three seats etc in the seat of Lyons. 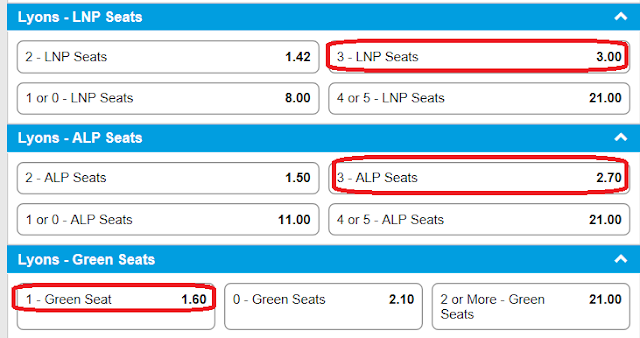 
When the bookies percentage is eliminated, and the odds converted to chances in % terms, if one assumes the two  major parties get two seats each, parties’ chances of fifth seat in Lyons as per the Sportsbet markets are:

The Greens are needless to say, favoured to win the fifth seat in both Denison:

In Bass the Greens are, perhaps surprisingly, favoured to win the fifth seat ahead of the others. The % chances are:

It’s not until one reaches Braddon that the Libs are favoured to win the fifth seat:

In other words, in its best seat, the Libs only have a 52 % chance of picking up the fifth seat.


Of course, the two major parties may fail to win two seats in a particular electorate. The most likely occurrence of this is the Libs only winning one seat in Denison. The chances of this are 26%.  The Libs only getting one seat in Lyons is a 10% chance. In the other seats the chances are single figure %s.

Labor’s chances of ending up with only one seat in any electorate are all below 20%, with Franklin being the highest at 19% followed by Bass (15%). The other three are single figure %s.


Sportsbet markets don’t include Jacqui Lambie Network. If it was included the relative chances of the three other parties are unlikely to change much.


Getting back to the hung vs not hung situation, incorporating the seat by seat chances above, Sportsbet punters assess the chances of the overall election outcome as follows:

The Sportsbet odds don't look much different to the odds implied by the November 2017 EMRS poll. If the Libs have picked up ground since then it's not reflected in the Sportsbet odds.

Interesting times ahead.
Posted by tasfintalk at 15:17