The surplus that never was (part 2)

“We have delivered on our commitment to fix the Budget” were the words of Treasurer Gutwein when handing down the government’s 2018/19 budget.


The Treasurer’s surplus fetish has obscured the reality that the 2018/19 budget outlined spending far in excess of receipts over the four-year period of the budget and the forward estimates.


This note outlines in more detail the actual cash position of the government before and after the Revised Estimates Report described in the last blog.

The government is essentially a cash business. Cash in and cash out. Profitability is not important. What is more crucial is cash sustainability, and secondly whether enough is being spent on capex, building new infrastructure and the like.


On the question of cash sustainability, the place to start looking is the Cash Flow Statement. The Treasurer wants us to focus on the Income Statement which half way down the page, produces a sub-total called the Net Operating Balance which he calls a surplus.


The Cash Flow Statement includes all inflows and outflows, not just the amounts included in the Income Statement. The problem with the Cash Flow Statement for a lay reader is that net cash flows from borrowings include the 24-hour loan the government takes out on balance date to repay all the internal borrowings that are being used to fund the government’s excess spending. Accounting standards don’t require footnotes to explain the balance date cosmetic exercise and the Treasurer is happy to keep everyone in the dark as he struts the stage as a financial maestro.


If the 24-hour borrowings are ignored, the true cash flows of the government are revealed. Ignoring the borrowings means adjusting the government’s cash balance by a similar amount. The resultant figure is what I’ve called the cash buffer in the following chart. This is the government’s actual cash on hand at balance date. 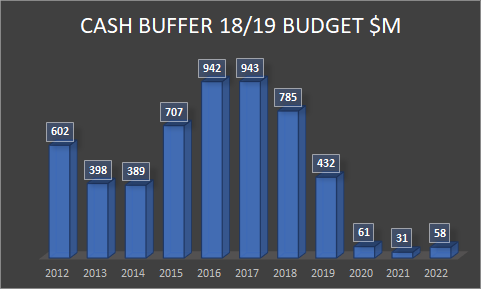 As can be seen when the present government took over the reigns in 2014 the cash buffer was $389 million in June of that year. When the 2018/19 budget was prepared, the estimated cash buffer as at June was $785 million. Four years later in 2022 the cash buffer is estimated to be only $58 million. That’s a run down in cash of $727 million. Despite this the Treasurer stuck with his surplus mantra as he proclaimed the end of deficits and the dawn of a golden age.


The recently released Revised Estimates Report for 2018/19 updated the figures in the budget. The changes as outlined in the writer’s last blog have had a radical effect on the State’s position. This is what the cash buffer looks like as a result of the revised estimates. 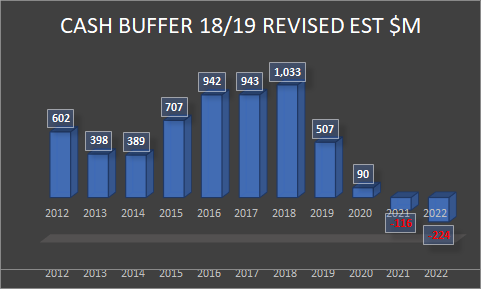 The first change relates to the 2018 figure. The figure in the original budget was an estimated outcome figure as 2018 hadn’t quite finished. Other changes mean the run down in cash is even more pronounced, from $1033 million in June 2018 to minus $224 million four years later. That’s a $1,254 million cash deficit over four year. The original budget showed a $728 million reduction. That’s a $527 million deterioration.


It’s more likely to get worse than better. It is difficult to believe the government has come completely clean with its Revised Estimates. The health budget for one still looks chronically underfunded as noted in the last blog.


One pleasing aspect of the Revised Estimates is that the government didn’t start deferring and postponing infrastructure spending as it usually does in response to cash flow difficulties.


External borrowing at some stage in two years’ time are inevitable. It just that the government is yet to admit it. When the cash buffer is in the red as per the last chart external borrowings will be required. The Revised Estimates Report is silent on the terms and conditions on the extra borrowings. At this stage an unlimited overdraft facility with no interest charges appears to be what has been assumed.


The Revised Estimates Report should signal an end to the government’s surplus fetish.  All stakeholders need to accept there is not any spare cash. Whatever extra we need will soon have to come from external borrowings. The public policy debate will need to shift to how much we borrow, how will loans be serviced and what are the spending priorities.


For four year the government’s blinkered view of the world and its arrogant, almost narcissistic belief that it knew how to solve the State’s budgetary problems, means we are back at square one once again searching for the best way forward.
(The charts were amended on 3rd Feb 2019 to correct incorrect figures for 2018 and prior years. Minor changes were made to the text.)
Posted by tasfintalk at 07:52