The surplus that never was (part3)

This note explains in a bit more depth the measures commonly used to describe a government’s performance, what they imply and what they hide.


This is what the Tasmanian government NOB looks like since the Libs took over in 2014. 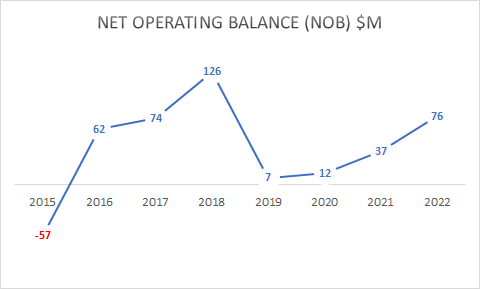 (Figures for 2018 and prior years are from the Treasurer’s Annual Financial Reports and from 2019 onwards from the Revised Estimates Report 2018/19).


The NOB is a profit measure. It includes all government receipts as income including capital grants from the Australian government. Asset sales and loans received aren’t included as is the case with any P & L statement. Operating expenses include depreciation on plant equipment buildings and infrastructure assets (capex). Also included is the estimated annual cost of the government’s employer contributions on behalf of current members of the unfunded defined benefit scheme. No amounts are paid because the government only pays its share on an emerging cost basis, in other words when an employee retires, dies or moves on, but because accruals accounting is used, these amounts are included as expenses in the NOB calculation. Superannuation paid on behalf of retired members are not operating expenses per se and aren’t included. Instead the cost of the unfunded super liability is included courtesy of an amount for nominal superannuation interest.


Hence the NOB is a conventional profit measure.


NOB gives a profit result, but it overlooks all the crucial capital outlays.


The second measure that always appears towards the front of any set of budget papers is the underlying NOB. This is the picture since 2015: 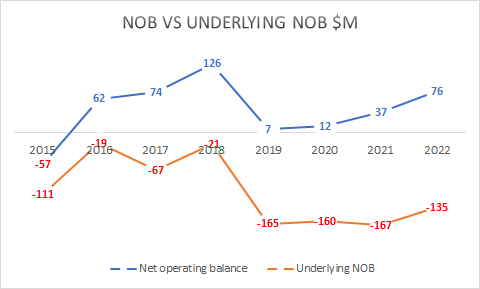 The underlying NOB is simply the NOB less capital grants for specific projects received from the Feds.


The underlying NOB will always be less than the NOB.


Removing capital grants makes sense if you want an operating figure. Subsequent spending of the grants aren’t included, but nor are all other capital outlays.


Also, it might make sense to remove the distorting impact of a one-off grant, but many of the capital grants, for roads, rail and water infrastructure are ongoing.


The underlying NOB is not of much use in measuring the performance of a government, being like NOB, a profit figure which ignores capital outlays.


The fiscal balance is a figure included at the bottom of any income statement in the budget papers. This is the pattern since 2015: 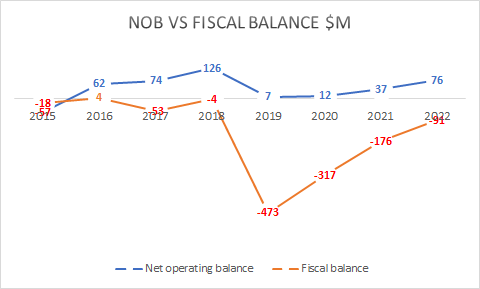 The fiscal balance is the NOB except the depreciation amount is swapped for net capex. If plant equipment buildings and infrastructure exceeds the run down in value of the existing stuff, then the fiscal balance will be less than NOB. This has been the case in all years except 2015, the government’s first full year in office.


The fiscal balance picks up all the outlays except for capital outlays represented by equity contributions into government businesses. A cash surplus/(deficit) figure, the conventional measure used in financial statement on the other hand picks up all outlays. This is the cash/(deficit) figure since 2015: 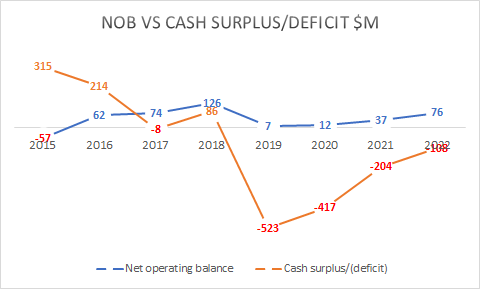 The Tasmanian government makes regular equity contributions int Tas Tail, Tas Irrigation, and more recently TTLine. They are, in effect no different to spending within the government itself. It makes sense to treat such outlays in a similar way. Governments can also make equity contributions to government businesses rather than showing them as operating grants which would affect the NOB figure for instance. The cash surplus/(deficit) picks up all outlays and arguably gives a more meaningful measure of a government’s performance.


Just going back to the fiscal balance measure for a moment. As stated, it will be less than NOB if we spend more on new capex than the old stuff is wearing out. Which we should be doing. It’s one of the government’s fiscal strategies that it needs to meet.


The first four years of the current government saw it pursue a strategy which can be best gleaned from the following chart: 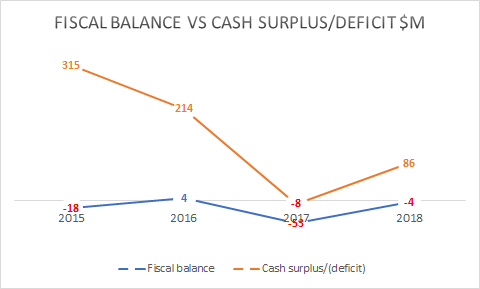 In every one of the four years from 2015 to 2018 the cash surplus was greater than the fiscal balance. This came about principally because of underfunding capex. It saved cash.


The cash position of the government since it took over in 2014 is shown here: 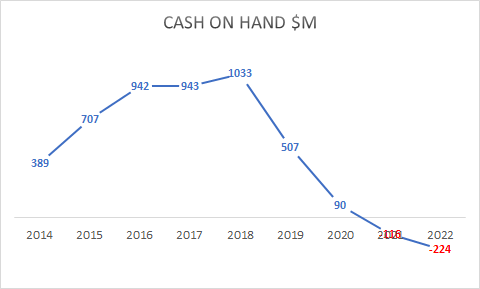 Cash was built up to reach $1,033 million by 2018. However over the next 4 years it will plummet to a negative $224 million. A negative figure means external borrowings will be needed. Until then internal borrowings are needed, from special deposits and trust accounts that have been set up to hold funds for specific purposes and which must be repaid at some stage. This is what the cash on hand figure and the internal borrowings looks like from 2014: 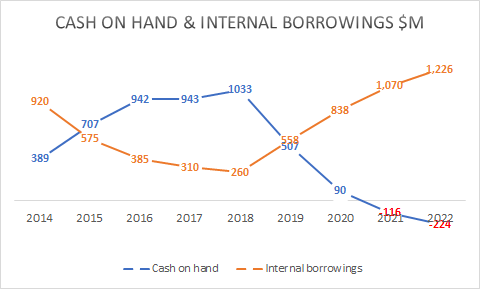 Back in 2014 there was only $389 million cash on hand. The previous government had borrowed $920 million internally to fund its overspending. For the next four years, cash was built up as the internal borrowings were gradually repaid. But as of now, for the next four years, we will see a complete run down in cash. If the pattern continues it will be no different to what the current Treasurer claims we were facing before he rescued us in 2014.


Nothing has changed.
Posted by tasfintalk at 08:15